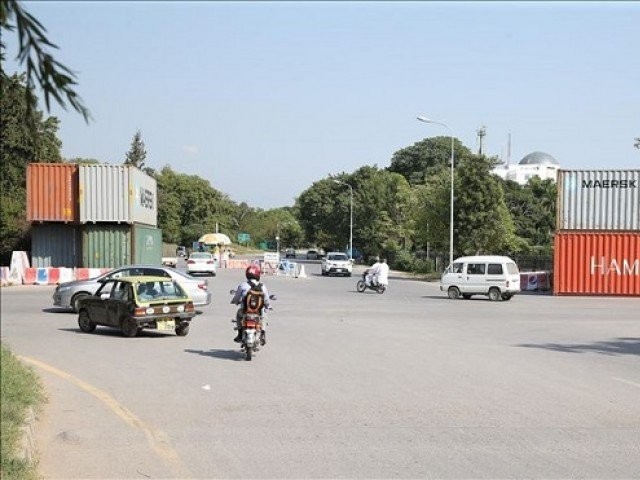 Containers are being replaced to entrances and highlights of city ahead of opposition party's anti government protest in Islamabad. PHOTO: ANADOLU AGENCY

The case was presided over by Chief Justice IHC Athar Minallah on Thursday in which Deputy Commissioner (DC) Islamabad Hamza Shafqat also appeared.

At the outset of the hearing, the court asked whether the seized containers were loaded with goods to which the DC replied in the negation and said all containers were empty. He told the court that the administration got containers on rent after all codal formalities including Public Procurement Regulatory Authority (PPRA) rules from a Lahore based company and it would pay Rs60 million for the service.

Minallah directed the administration to refrain from seizing loaded containers to which the counsel for the petitioner claimed that their containers had been held and pleaded the court to issue a verdict so that the practice was not repeated in the future.

At this, the Chief Justice remarked that strict action should be taken if any containers were detained illegally under violation of Article 18 of the constitution. He added that it was the federal government’s responsibility to protect all containers being used across the country for the purpose of blocking roads. He instructed the government to clear dues of all containers’ owners.

IHC issued notices to the ministry of health and other respondents in a petition challenging the dissolution of Pakistan Medical and Dental Council (PMDC) on Thursday.

Justice Mohsin Akhter Kiyani heard the petition filed by sacked employees of PMDC and sought reply from respondents on November 8.

The counsel representing the petitioners Baber Sattar Advocate pleaded before the court that the summary of the new ordinance was supposed to be prepared by the establishment division under business rules. He said that three members of the Pakistan Medical Commission had been elected from civil society while the other three from private institutions, alleging they had their financial interests. The lawyer argued that many other institutions including Securities and Exchange Commission of Pakistan (SECP) were also facing regulatory issues.

The court issued notices to ministry of health, law and justice and establishment divisions, Attorney General Pakistan (AGP) and additional secretaries of health services to respond on the matter.

Fazl sticks to his demands as ‘Azadi March’ moves towards Islamabad

IHC has appointed six officials who would take action on emergency applications after office hours and during official holidays.

The move was taken to ensure provision of rapid justice to the litigants.

In this regard, Deputy Registrar IHC issued a notification which stated that the IHC would hear the emergency cases even after office hours and on official holidays. The emergency cases including threat to life of any prisoner and other matters of emergency nature would be heard by the chief justice immediately.

For fulfilling this purpose, the chief justice has appointed six officers who would be available after office hours.

The notification further said that an additional registrar would be available round the clock on phone for any emergency matter.