She helped refuge­es and intern­ally displa­ced people around the world
By AFP
Published: October 29, 2019
Tweet Email 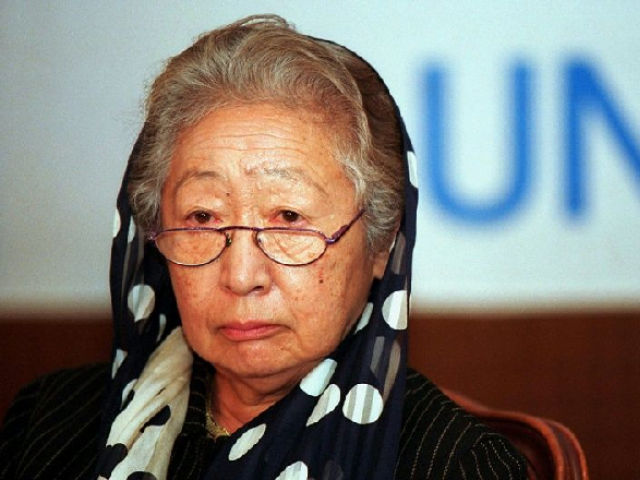 Ogata was widely respected for her efforts to help refugees and internally displaced people around the world and emphasised making visits to conflict zones during her tenure from 1991-2002.

She worked to help Kurdish refugees from Iraq after the Gulf War and was also known for tackling the refugee crises in the former Yugoslavia and Rwanda.

She was credited with reestablishing UNHCR’s credibility and was even touted as a potential successor to former UN chief Boutrous Boutrous-Ghali.

A petite woman with a calm demeanour, she won special praise for her tough action in former Yugoslavia where she managed to draw the world’s attention to humanitarian issues despite bitter political disputes among Western countries.

She also served as the head of her country’s development aid organisation Japan International Cooperation Agency (JICA) from 2003 through 2012.

She was known as a passionate advocate for the rights of refugees, urging “understanding and compassion” for their plight.

“I have seen with my own eyes the despair in the eyes of people who have lost everything, whose loved ones have been killed, whose houses and livelihoods have been destroyed, and who have been forced to flee in the middle of the night with nothing but the clothes on their backs,” she said in a speech in 2000.

“But I have also witnessed the courage and resilience of so many people who have lost everything but hope. Refugees are the great survivors of our times and they deserve our respect and our solidarity.”

Ogata died on October 22, but her death was only announced publicly on Tuesday.

She was born in Tokyo in 1927 into a prominent political family – her great-grandfather was prime minister Tsuyoshi Inukai and her grandfather was foreign minister Kenkichi Yoshizawa.

She spent her early years abroad including in the United States and China, where her father worked as a diplomat.

After becoming the first Japanese woman to represent the country at the United Nations in 1976, Ogata served as the Japanese representative at the UN Commission on Human Rights from 1982 to 1985.