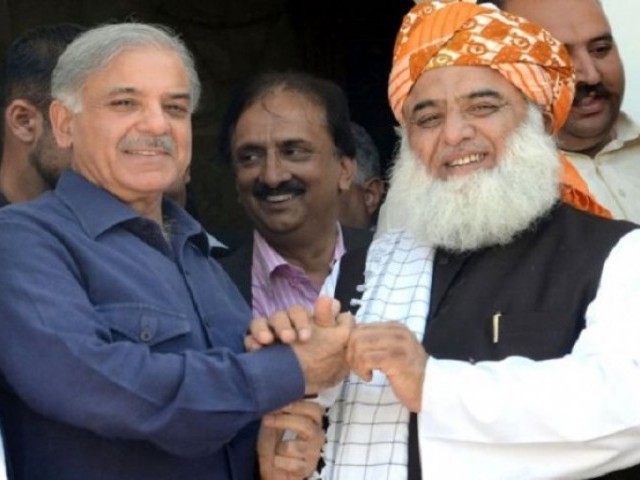 LAHORE: Opposition Leader in the National Assembly Shehbaz Sharif has directed his Pakistan Muslim League-Nawaz (PML-N) party workers to stage a ‘powerful reception’ for the participants of Azadi March upon their arrival in Lahore.

Ahsan Iqbal, while talking to the media before the meeting, said that the party will participate in Azadi March with full energy.

Blaming the Pakistan Tehreek-e-Insaf (PTI) government for Nawaz’s health woes, he said the rulers failed to provide proper health facilities to the three-time premier at jail and in NAB’s custody despite repeated advices by the government doctors.

Sources privy to the meeting told The Express Tribune that senior PML-N leaders suggested that Nawaz’s health condition was not stable and he should be taken abroad for medical treatment.

Shehbaz, however, said that his elder brother and his daughter Maryam Nawaz will make the final decision in this regard. He said he had also shared with Nawaz and Maryam expert opinion of London doctors.

During the meeting, Shehbaz directed Pervaiz malik, the president PML-N’s Lahore chapter, to accord a warm welcome to Maulana Fazlur Rehman’s Azadi March on its arrival in the Punjab capital.

Later Shehbaz, along with Khawaja Asif, Marriyum Aurangzeb and other leaders visited Services Hospital to inquire after the ailing PML-N supremo.