KARACHI: Several coastal villages and localities of Karachi were inundated on Wednesday after a tidal surge raised the sea level along the coastline due to cyclone ‘Kyarr’ intensifying in the Arabian Sea. Coastal localities and villages of Hawkes Bay, Ibrahim Hyderi, Lath Basti, Rehman Para, Rehri Goth and others were inundated and residents called upon the government for assistance as the sea water flooded the streets and entered their homes on Monday.

According to the Pakistan Meteorological Department, the coastal belt of Pakistan is not at high risk from the sea storm as the ‘Very Severe Cyclonic Storm’ is gradually heading towards the coast of Oman. The storm may change its direction on the morning of October 30, said the met department officials, adding that the weather system may also cause intermittent showers in the coastal parts of the country.

According to the tropical cyclone advisory issued by the Met department, Kyarr has transformed into a super cyclonic stage and was centered 750 kilometers west off Karachi’s coast on Monday morning, while continuing to travel in the south-west direction.

Satellite imagery showed the storm heading towards Oman, with the Met department reiterating that it posed no major risk to any coastal areas of Pakistan, including those in Sindh and Balochistan.

According to chief meteorologist Sardar Sarfaraz, Kyarr was formed on October 25 and is the strongest cyclone after the ‘Goryu’ super cyclone that hit the coastal areas of the country in 2007. It is the ninth super cyclone to have developed in the North Indian Ocean after ‘Goryu’.

While Kyarr is heading towards Oman, the storm will give rise to a new wind system in the next 48 hours due to which the cyclone may die down in the sea or may be redirected towards the south. If the storm is redirected, the coastal areas of Karachi and Balochistan will witness strong winds and rains accompanied by thunder and lightning between October 31 and November 1. The storm is likely to hit Oman on November 2 or 3. According to the Met chief, the new wind system will first cause an atmospheric depression and then turn into a storm, which would then be called ‘Maha’.

In its latest weather advisory, the Met department has warned the fishermen not to venture out into the deep sea. Authorities have also placed a three-day ban on fishing activities in all jetties.

According to the Fishermen Cooperative Society, dozens of boats were called in from the sea after the red alert was issued on Monday.  However, a few boats are still out in the sea and are on their way back. As per the PDMA spokesperson, the disaster management staff is available to rescue and relocate people displaced by the storm, but residents of the area are not ready to leave their towns. The PDMA has, however, set up 300 camps to cope with any untoward situation.

Meanwhile, the Sindh local government department has issued an alert regarding Cyclone Kyarr, with the LG minister Nasir Hussain Shah directing officials to initiate rescue work in areas affected by the storm in collaboration with the National Disaster Management Authority.

The directives were issued in an emergency meeting chaired by LG minister Shah, and which was attended by LG secretary Roshan Sheikh, Karachi Water and Sewerage Board managing director, Asadullah Khan, and other relevant officials. The meeting was informed that the cyclone may affect the coastal belt of Sindh, while high tides may hit various coastal villages. The LG minister directed the officials to issue an emergency alert for the mayor, DMC’s chairpersons and other relevant departments.

DHA Golf club in #Karachi due to high tide. 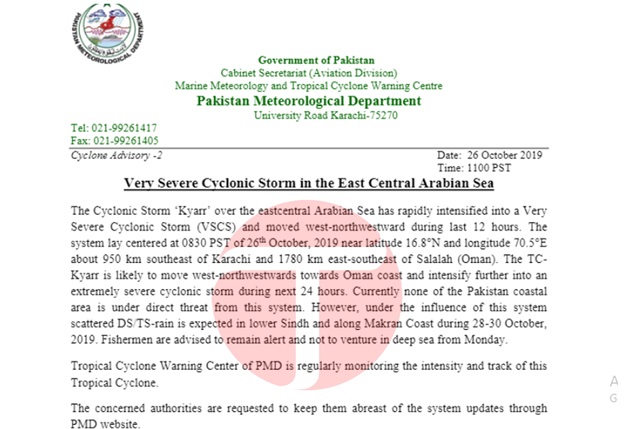 ‘Kaaf Kangana’ and ‘Durj’ turn out to be box office disappointments