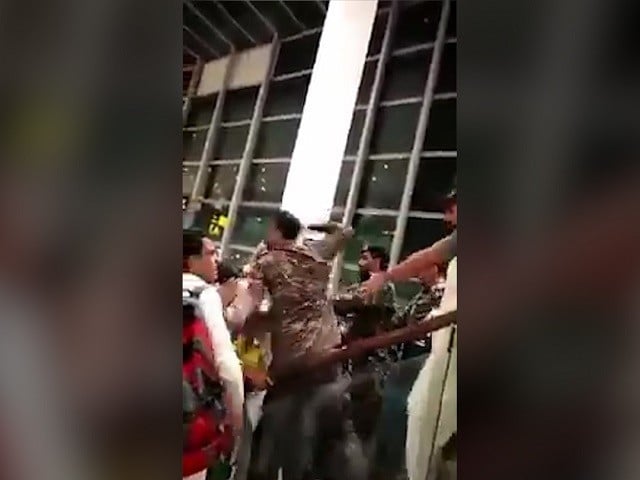 The ASF has launched an inquiry into the incident that reportedly occurred on October 18. PHOTO: EXPRESS

ISLAMABAD: A video has emerged of a recent scuffle between Airports Security Force (ASF) personnel and passengers at the Islamabad airport.

The footage shows passengers and ASF staffers physically assaulting each other, and abusive language can also be heard from both sides.

An enraged ASF official can then be seen spitting at a passenger before hurling a chair at him.

Sources say the incident occurred on October 18 when a Pakistan International Airlines (PIA) flight – PK-728 from Jeddah to Peshawar – was forced to land at the New Islamabad International Airport due to bad weather.

The passengers were agitated because the national flag carrier failed to provide them any food or refreshments for over an hour.

They vented their frustration by damaging property in the airport’s VIP lounge.

ASF personnel were told to control and pacify the passengers but they ended up worsening the situation through their unprofessional behaviour.

The ASF has launched a departmental inquiry against one of the officials involved in the altercation. CSO Colonel Jehangir is leading the probe.

A PIA spokesman clarified that no staff member of the national flag carrier was involved in the incident. He said an investigation is being conducted by the aviation division and vowed exemplary punishment for any official found guilty of misconduct.

The video gained much traction on Twitter as users denounced the ASF personnel’s aggressive behaviour.

Airports in the federal capital are no stranger to violence as earlier in 2017 a video emerged of Federal Investigation Agency (FIA) officials beating up two women at the Benazir Bhutto International Airport.

In the video, female staffers of the FIA’s immigration department
were seen physically assaulting the passengers.

#Islamabadairport#FIA thank you for bringing shame to your country pic.twitter.com/xTOoaHQlcC

Whether you misuse #MeToo or delay accountability, the result is death: Mahira Khan