Argue they would be willin­g to pay taxes if due facili­ties were provid­ed
By ​ Our Correspondent
Published: October 21, 2019
Tweet Email 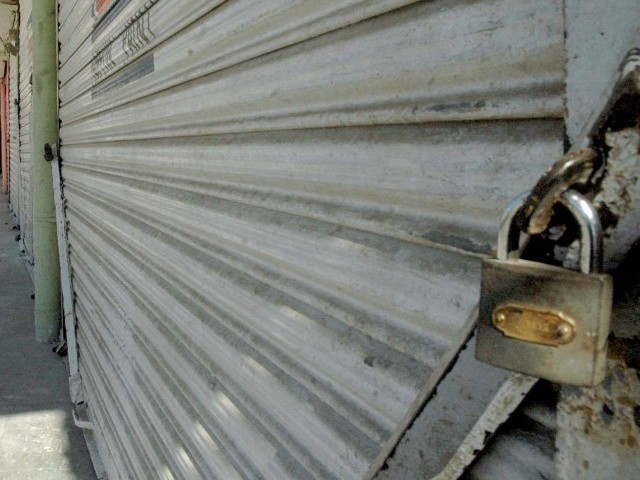 HYDERABAD: The All Pakistan Anjuman-e-Tajran will observe a shutter down strike across Pakistan on October 29 and October 30. The association’s central general-secretary, Naeem Mir, while addressing traders in Mirpurkhas on Sunday said that their agenda is not to seek the removal of Prime Minister Imran Khan but only to redress harmful economic policies.

“The traders have been disillusioned by the government’s policies and the regressive taxes,” he said. Mir added that he believed in a negotiated settlement of disputes and with such an intention he remained part of the team that negotiated with the government of Pakistan Tehreek-e-Insaf (PTI).

He said that if the state provided facilities to traders, they will be willing to pay all the due taxes. He added that the business community that turned up against the government can extend cooperation and help the government reduce internal and external loans only if they are considered stakeholders and consulted accordingly in policy making.

“Unfortunately, the government is not implementing a trade-friendly policy. Rather, its policies have been directly hurting trade and the economy.” Mir maintained that providing a copy of the national identity card for a transaction is not a problem for traders. “We are ready to give the NIC cards if we are assured that they won’t ask about our financial records of the last six years.”

He asserted that the traders will not act as withholding tax agents for the Federal Board of Revenue. The association’s central general-secretary opposed the levying of 1.5 per cent tax on the profits of traders, arguing that their actual profit after deducting the cost was hardly around 1 per cent. He said the traders will be willing to pay between 0.25 per cent to 0.5 per cent tax.

Mir offered the government to accept their demands so that they may withdraw the call for a countrywide strike. He reiterated that the traders are not a tool of some political agenda and their protests are only aimed to reverse the government’s adverse economic policies.