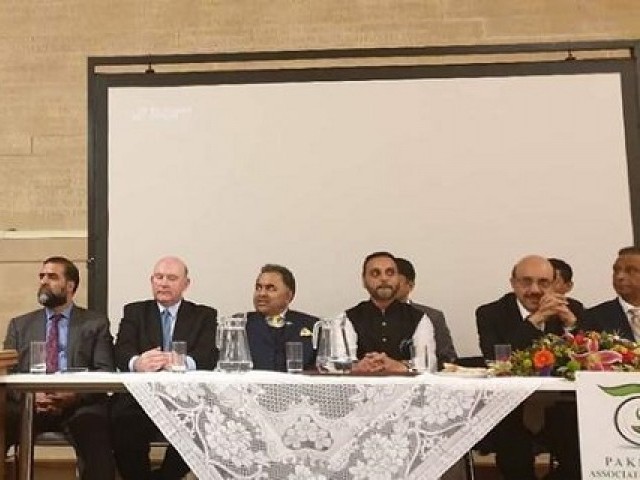 It is the responsibility of UK to come forward for human cause, says Masood Khan at event in Bristol. PHOTO: EXPRESS

BRISTOL: Azad Jammu and Kashmir (AJK) President Sardar Masood Khan has urged the international community to play its role in ending the continuing clampdown in Indian Occupied Kashmir (IOK), which is in place since New Delhi revoked its special status on August 5.

He was addressing a ceremony organised by Pakistani Association of Bristol (PAB) and Bristol Kashmir Foundation (BKF) in Bristol Community Hall on Saturday.

“It is the responsibility of the United Kingdom to play its role for a peaceful resolution of Kashmir dispute,” he said.

The AJK president said Kashmir was neither India’s internal matter nor a bilateral issue between Islamabad and New Delhi.

“If Kashmir had been an internal matter of India, it would never have been discussed in London, New York, Washington and Brussels,” he said.

Speaking on the occasion, Chairman Public Accounts Committee AJK Abdur Rashid Turabi said the people of IOK were not ready to compromise on their right to self-determination.

“It is the duty of the international community to come forward and help Kashmiris get their fundamental rights, which have been snatched by the Indian government,” he said.

Mayor of Bristol, Tom Aditya, and Councillor Tim Boss, among others also spoke on the occasion, and extended their support to the people of IOK in their struggle against Indian rule.