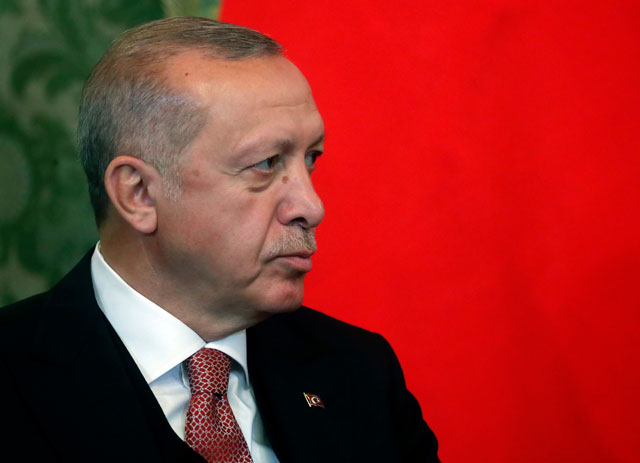 WASHINGTON: President Donald Trump imposed sanctions on Turkey on Monday and demanded the NATO ally stop a military incursion in northeast Syria that is rapidly reshaping the battlefield of the world’s deadliest ongoing war.

Trump, who gave what critics say was a de facto green light for Turkey’s assault by ordering US forces away from the conflict area, requested the ceasefire in a call with President Tayyip Erdogan.

“The United States of America simply is not going to tolerate Turkey’s invasion in Syria any further. We are calling on Turkey to stand down, end the violence and come to the negotiating table,” Vice President Mike Pence told reporters.

The move was quickly criticized as too little, too late by the top Democrat in Congress.

“His announcement of a package of sanctions against Turkey falls very short of reversing that humanitarian disaster,” said US House of Representatives Speaker Nancy Pelosi.

Turkey aims to neutralize the Kurdish YPG militia, the main element of Washington’s Kurdish-led ally, the Syrian Democratic Forces (SDF), which has been a key US ally in dismantling the militant Islamic State’s “caliphate” set up in Syria.

Ankara regards the YPG as a terrorist group aligned with Kurdish insurgents in Turkey.

Russia-backed Syrian forces on Monday took rapid advantage of the abrupt US retreat in Syria to deploy deep inside territory held by US-backed Kurdish forces south of the Turkish frontier. Washington had announced plans for a full withdrawal from northern Syria less than 24 hours earlier.

Washington’s Kurdish former allies said they invited in the government troops as an emergency step to help fend off the Turkish assault, launched on Wednesday after what the Kurds called a US betrayal.

The Syrian army deployment is a victory for President Bashar al-Assad and his most powerful ally, Russia, giving them a foothold in the biggest remaining swath of the country that had been beyond their grasp.

They will now face Turkish armed forces along with a new front line hundreds of miles long.

Syrian state media reported the army entered Manbij, a town that had been controlled by a militia allied to the Kurds.

Earlier, it pushed into Tel Tamer, a town on the strategically important M4 highway that runs east-west around 30 km south of the frontier with Turkey.

State television later showed residents welcoming Syrian forces into the town of Ain Issa, which lies on another part of the highway, hundreds of miles away.

Ain Issa commands the northern approaches to Raqqa, which Kurdish fighters recaptured from the militants two years ago in one of the biggest victories of a US-led campaign.

Much of the M4 skirts the southern fringe of the territory where Turkey aims to set up a “safe zone” inside Syria. Turkey said it had seized part of the highway. An official of the Kurdish-led Syrian Democratic Forces (SDF) said clashes were ongoing.

After defeating 100% of the ISIS Caliphate, I largely moved our troops out of Syria. Let Syria and Assad protect the Kurds and fight Turkey for their own land. I said to my Generals, why should we be fighting for Syria….

….Don’t the Europeans have a lot of responsibility?” @KatiePavlich Thank you Katie, I offered ISIS prisoners to the European countries from where they came, and was rejected on numerous occasions. They probably figured that the U.S. would bear the tremendous cost as always!

The swift Syrian government deployments underscored how suddenly the strategy the United States had pursued in Syria for the past five years had unravelled. Washington said on Sunday it was pulling out its entire force of 1,000 troops, which had provided air support, ground assistance and training for Syrian Kurds against IS since 2014.

Trump said US troops would remain at a small garrison at al-Tanf in southern Syria “to continue to disrupt remnants” of IS. But the base would do little to support operations elsewhere in the country.

Republican Senate Majority Leader Mitch McConnell, better known for his backing of Trump, joined his critics to express concern over the Syria pullout, saying it would “invite the resurgence” of IS.

“Such a withdrawal would also create a broader power vacuum in Syria that will be exploited by Iran and Russia, a catastrophic outcome for the United States’ strategic interests,” he said in a statement. 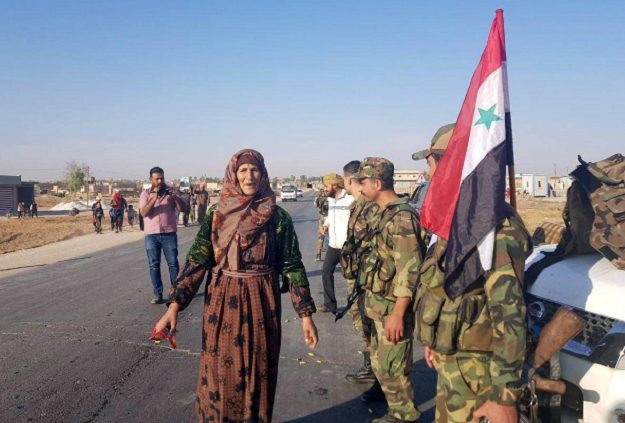 A US official said on Monday a diplomatic team working to help stabilize territory captured from Islamic State had already pulled out. US troops were still on the ground but early phases of their withdrawal had started, the official said.

Two other US officials have told Reuters the bulk of the US pullout could be completed within days.

The Trump administration has denied its troop pullback triggered the Turkish incursion.

“I can tell you with complete confidence that nothing that we did one way or the other was going to deter the Turks from what they wanted to do,” a senior Trump administration official said.

Thousands of fighters from a Kurdish-led force have died since 2014 battling IS in partnership with the United States, a strategy the Trump administration had continued after inheriting it from his predecessor, Barack Obama.

“After the Americans abandoned the region and gave the green light for the Turkish attack, we were forced to explore another option, which is talks with Damascus and Moscow to find a way out and thwart these Turkish attacks,” senior Kurdish official Badran Jia Kurd said.

Jia Kurd described the new arrangement with Assad’s forces as a “preliminary military agreement”, and said political aspects would be discussed later. 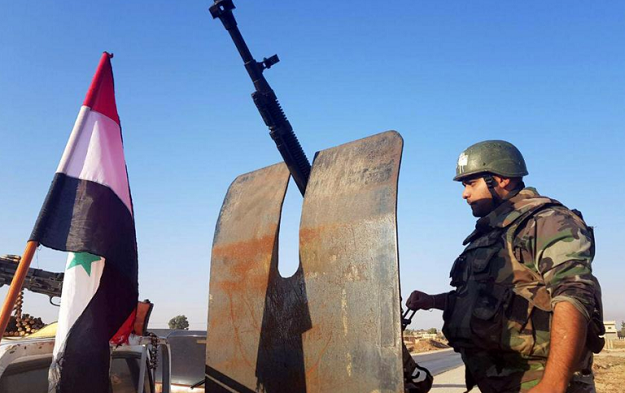 A Syrian army soldier is seen in the town of Tel Tamer in northeast Syria. PHOTO: REUTERS

It remains to be seen how the Kurds will be treated now. Kurdish fighters began carving out autonomous rule in Syria’s northeast early in its eight-year-old war, benefiting from diversions of Assad’s military to fight elsewhere. Assad aims to restore his government’s authority across all of the country.

Senior Kurdish politician Aldar Xelil called the pact with Damascus “an emergency measure”. “The priority now is protecting the border’s security from the Turkish danger.”

Trump says he aims to extract the United States from “endless” wars in the Middle East.

“Anyone who wants to assist Syria in protecting the Kurds is good with me, whether it is Russia, China, or Napoleon Bonaparte,” Trump wrote on Twitter earlier on Monday. “I hope they all do great, we are 7,000 miles away!”

In a speech during a visit to Azerbaijan, Erdogan said: “We are determined to continue the operation until the end, without paying attention to threats.”

“Our battle will continue until ultimate victory is achieved,” he added.

The US exit leaves Turkey and Russia, as well as Iran, Assad’s main Middle East ally, as Syria’s undisputed foreign power brokers. Ankara and Moscow both predicted they would avoid conflict in Syria, even as the front line between them will now spread across the breadth of the country.

“There are many rumors at the moment. However, especially through the embassy and with the positive approach of Russia in Kobani, it appears there won’t be any issues,” Erdogan said when asked about the prospect of confrontation with Russia.

Kobani, on the Turkish border, is one of the first Kurdish-held cities where reports emerged of possible Syrian government deployment.

Trump raised the issue with Erdogan, who provided a firm commitment not to attack Kobani, said Pence.

Kremlin spokesman Dmitry Peskov dismissed the suggestion that Russia could clash with Turkish forces. “We wouldn’t even like to think of that scenario,” he said.

The fighting has raised concerns that the Kurds would be unable to keep thousands of IS fighters in jail and tens of thousands of their family members in camps.

The region’s Kurdish-led administration said 785 IS-affiliated foreigners escaped a camp at Ain Issa over the weekend. The British-based war monitor Syrian Observatory for Human Rights, citing sources in the camp, said the number who escaped was smaller, around 100.

EU countries have threatened to impose sanctions on Turkey over the assault. But at a meeting on Monday, they agreed not to impose an embargo. Member countries would instead consider their own restrictions on sales of weapons, a measure likely to be brushed off as trivial, as arms account for just 45 million euros out of more than 150 billion euros in Turkey-EU trade.

US Defense Secretary Mark Esper said he would call on NATO allies to “take collective and individual” actions against Turkey when he meets defense chiefs in Brussels next week.

Republican and Democratic leaders of the US Congress have announced plans to impose their own sanctions. Turkey’s trade with the United States is a fraction of its trade with Europe.