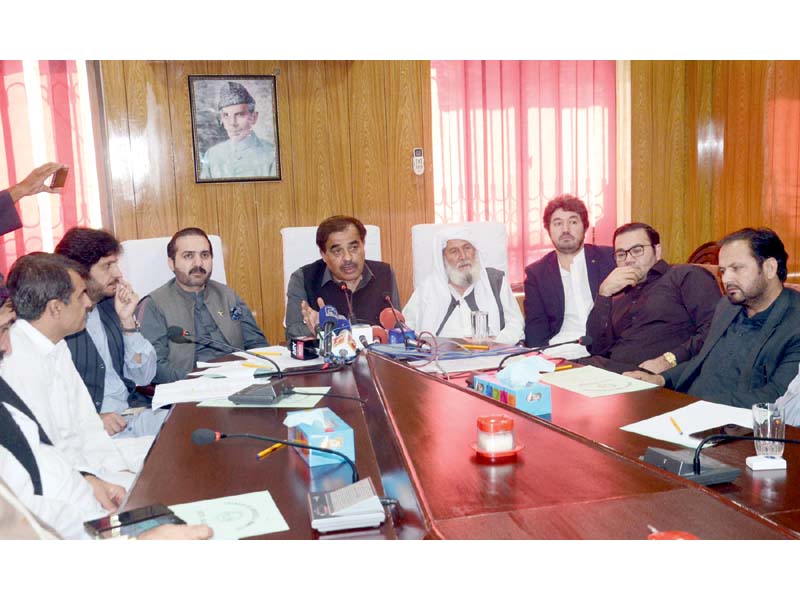 QUETTA: Trade activities remained suspended at Taftan border for seventh day running, as businessmen in the province are protesting against customs officials for seizing their import cargo, prompting an influential senator to come rushing in to break the logjam.

Senator Mirza Muhammad Afridi, who heads Senate Standing Committee on Commerce and Textile, assured local traders that he would take up their issues with the Federal Board of Revenue chairman and, if necessary, also approach PM Imran Khan.

The senator, who was on an official visit to Quetta to discuss the matter, addressed a joint news conference with the business community at Quetta Chamber of Commerce and Industry (QCCI) office.

He was accompanied by Senator Ahmed Khan Khilji, QCCI President Ghulam Farooq Khilji and other members of the chamber.

The senator said the Pakistan Tehreek-e-Insaf-led government was committed to stopping smuggling and encouraging legal trade with neighbouring countries – including Iran and Afghanistan – to enhance revenues of the country.

On the occasion, QCCI President Ghulam Farooq Khilji said the business community, including traders, was paying a huge sum under customs duty and other levies on import and export to boost legal trade in the province.

“The annual earning on account of federal duty and other taxes has reached over Rs24 billion from Balochistan,” he said, adding the country would progress with enhancing tax collection.

He also said: “Customs and FBR Balochistan officials were discouraging legal trade through seizing legally imported scrap material from Iran despite checking by the Customs appraiser at Taftan border and paying all duties.”

The president alleged that some trucks loaded with scrap material were stopped at Dalbandin and Nushki by the Customs for “wrongly cleared” by the Customs appraiser.

President Khilji challenged Customs officials’ claim that scrap loaded in the seized trucks does not come under the definition of scrap. “The scrap, including just 2.5 meter pieces of still bars, loaded on the trucks with other scrap material were sent to the re-rolling foundries,” he said.

He suggested that a joint team comprising both Customs officials and representatives of the business community should be formed for checking imported scrap upon its arrival at Taftan border.

The business community continued to boycott trade activities at the Pakistan-Iran Taftan border for the seventh consecutive day on Monday in protest against “discriminative behaviour” and “seizing of trucks loaded with important scrap by the Customs and the FBR”.

Officials at Taftan border confirmed suspension of all trade at the border and said hundreds of trucks stranded on both sides of the border. “There is no collection of duty and other taxes on import and export since last one week,” official sources said.

“The government of Balochistan has incurred losses amounting to Rs300 million because of week-long halt on trade activities via Iran border,” according to an official source.

On Sunday, Balochistan’s business community – including the QCCI, clearing agents, and traders – while talking to reporters officially announced they will boycott business activities for an indefinite period.

QCCI president said, “The business community would continue to boycott trade activities across the province against the obstinacy of Customs Chief Collector Chaudhry Zulfiqar who is fostering illegal trade in Balochistan.”