Import­s declin­e but export­s could not pick up pace
By Shahbaz Rana
Published: October 12, 2019
Tweet Email 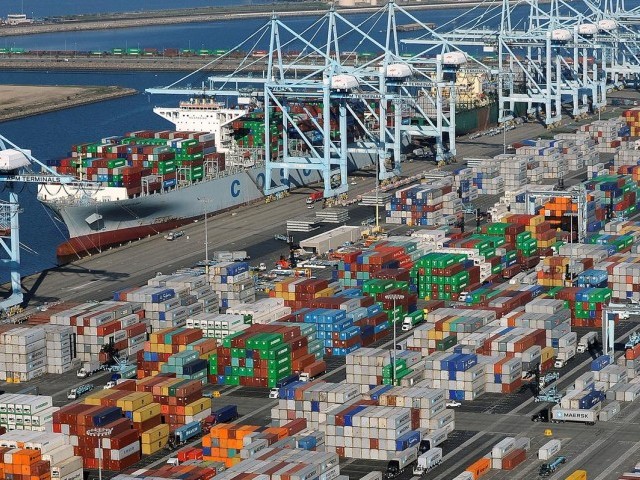 ISLAMABAD: Pakistan’s trade deficit has narrowed nearly 35% to $5.7 billion in the first quarter due to compression of imports but the government must now start worrying about exports that are not picking up despite an Rs80-billion hit on revenues and inflicting a huge cost to the economy.

Trade figures that the Pakistan Bureau of Statistics (PBS) released on Friday showed that exports fell in September over the preceding month but marginally increased on an annual basis despite over one-third depreciation of the rupee against the US dollar.

If first-quarter results are taken as a base for the entire year, the year-end prospects remain bleak. The Pakistan Tehreek-e-Insaf (PTI) government may again miss the annual export target until corrective measures are taken to increase monthly shipments far above $2 billion.

Cumulatively, the exports grew 2.8% or just $148 million to $5.5 billion in the July-September quarter of the current fiscal year, reported the PBS. On average, Pakistan exported $1.84 billion worth of goods per month, which did not correspond with the hype created by the China-Pakistan Free Trade Agreement-II concessions and positive impact of currency depreciation. 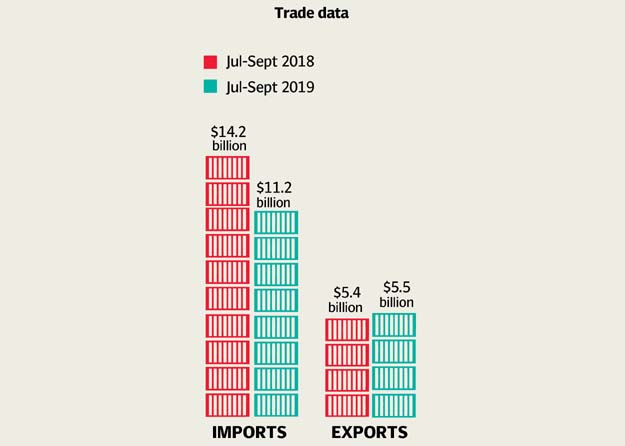 Imports during the period under review dropped 20.5% to $11.2 billion, according to the PBS. In absolute terms, imports contracted $2.9 billion, which provided some relief to the government that was unable to enhance exports.

The International Monetary Fund (IMF) has projected that the trade deficit in the current fiscal year would narrow down to $24.8 billion. The projection is based on 8.2% increase in exports and 4.7% contraction in imports. However, exports have so far grown at a pace of only 2.8% and imports have shrunk over 20%.

Should deficit contraction be celebrated?

When the PTI came to power, it faced the mammoth task of containing the current account deficit, which was at the historically high level of $19 billion due to high imports and lower exports. It took measures to contain the import bill and enhance exports.

Import compression measures have worked effectively, although these have negatively impacted the real economy and caused a reduction in tax revenues. The country’s external debt servicing cost has grown phenomenally besides the addition of Rs3 trillion to the public debt due to currency depreciation in the fiscal year 2018-19.

“Reduction in dutiable imports has adversely affected the Federal Board of Revenue’s (FBR) tax collections at the import stage,” FBR Chairman Shabbar Zaidi told The Express Tribune early this month.

Overall, the import compression policies have affected the FBR’s revenues by Rs80 billion, which has resulted in a shortfall of Rs114 billion in tax revenues despite taking huge advances and blocking taxpayers’ refunds.

The currency devaluation, as part of the import compression policies and also to increase exports, stoked inflation and increased the cost of doing business.

Despite doing all this, the country’s exports could not touch even the $6-billion mark in the first quarter. This requires a serious review of monetary, fiscal and administrative policies.

The government should withdraw the fiscal benefits extended to the influential All Pakistan Textile Mills Association and divert these resources to small and medium enterprises, which can also create jobs and help increase exports.

In the first two months (July-August) of FY20, textile-sector exports increased just $52 million to $2.3 billion, which did not commensurate with the concessions that textile tycoons were enjoying in the shape of cheap financing and subsidised electricity and gas.

In September 2019, imports in dollar terms fell to $3.8 billion compared to $4.4 billion in the same month of last year, which reflected the contraction of over 13.9%, reported the PBS.

Exports marginally increased 2.7% to $1.8 billion in September, a net increase of a mere $46 million. The trade deficit in September contracted 24.5% to $2 billion.