'Pakistan Navy will give befitting response to any misadventure'

'Pakistan Navy will give befitting response to any misadventure' 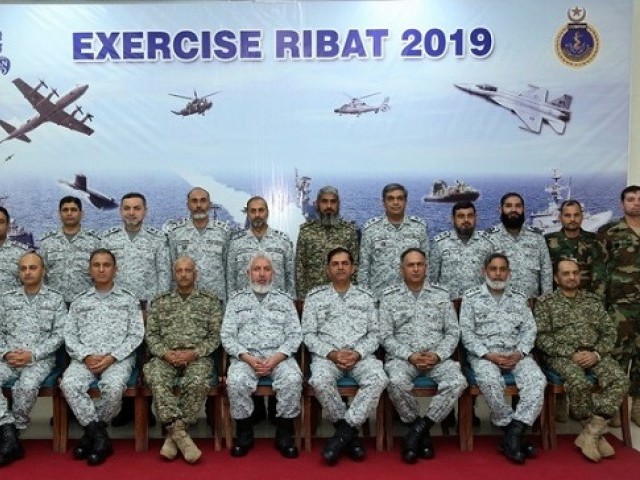 Vice Chief of the Naval Staff Vice Admiral Kaleem Shaukat said on Thursday that Pakistan Navy would give a befitting response to any misadventure.

He made the remarks at the debrief session of operational exercise RIBAT at Karachi’s Pakistan Navy Tactical School, where he was a special guest.

Speaking at the occasion, Vice Admiral Shaukat expressed his satisfaction over the combat readiness of Pakistan Navy fighting units.

“Joint operational exercises are the essence of modern warfare which afford desired level of training to undertake the country’s defence,” he said.

The chief guest during interaction with officers and men appreciated their morale, level of preparedness and resolve to defend maritime frontiers.

“We [Pakistan Navy] are fully capable to counter any act of aggression by the adversary,” the naval vice chief said.

He lauded the efforts of all those who took part in the exercise, adding, “You have practically manifested war fighting plans in North Arabian Sea.”

He said the navy’s platforms and personnel remained vigilant and combat ready to guard the sea frontiers and defend Pakistan’s maritime interests.

“Pakistan Navy will continue to hone skills of its personnel through conduct of such joint exercises in sync with other services in future,” the chief guest said.

The RIBAT series of exercises focus on validating the navy’s war fighting concepts under evolving multi-faceted threats, ranging from conventional to grey-hybrid warfare.

During RIBAT-2019, emphasis was laid to manifest war plans of Pakistan Navy in sync with Pakistan Air Force to achieve higher level of synergy between the two sister services.