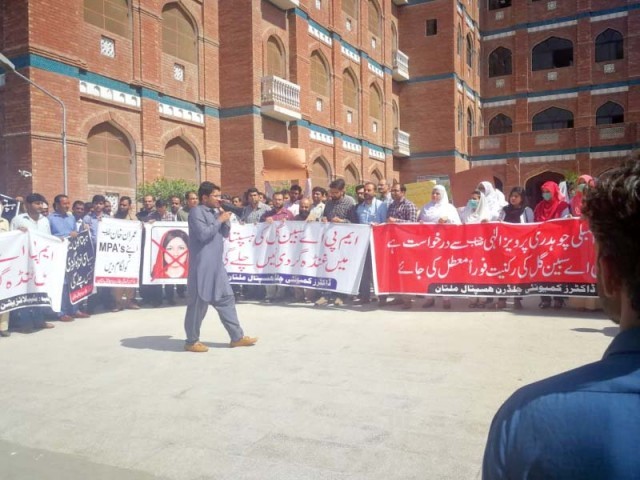 MULTAN: Patients were left in the lurch after the Grand Health Alliance (GHA) observed a strike at the out-patient department in protest of possible rumours regarding the privatisation of public hospitals.

The strike, which began at noon, left patients and their attendants in dire straits as they were forced to sit on the floor outside the ward and wait for medical assistance.

Later, GHA leaders also protested outside the ward. As a result, patients had to return home without receiving medical assistance and treatment.

Meanwhile, the medical superintendent of Nishtar Hospital, on the directives issued by the federal ombudsman, has put up banners in the hospital regarding sexual harassment of women at work. According to the hospital’s management, the banners have been put up to ensure the safety of women.

Reportedly, anyone can register sexual harassment complaints with the medical superintendent. Further, an anti-harassment committee has been constituted to deal with such cases. Dr Tariq Peerzada, Dr Shahida Tabassum and Dr Sajida Parveen are part of the committee.

The committee will also participate in an introductory session to be held on October 12 at Nishtar Committee Hall in order to educate staff.

In addition to this, Punjab Chief Minister Sardar Usman Buzdar has issued directives for the procurement of 30 dialysis machines and 30 ventilators for Nishtar Hospital.

Reportedly, Nishtar Medical University Vice Chancellor Dr Mustafa Kamal met with the Punjab health secretary during which he was informed about the CM’s directives and told to implement them immediately.

The CM was informed about the shortage of ventilators and the problems patients with kidney issues are facing when he visited the facility.