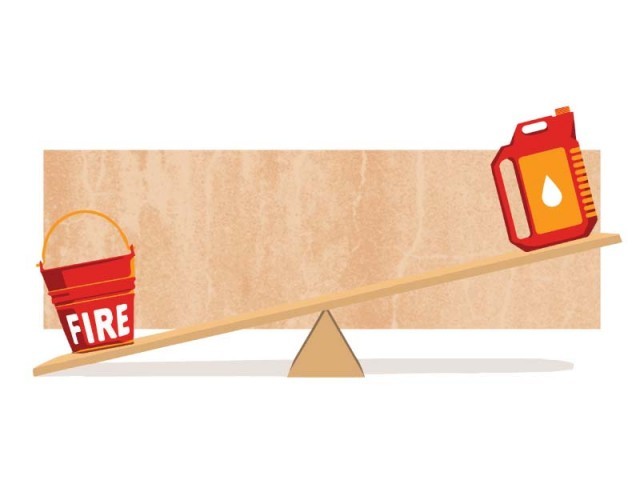 KARACHI: Already in need of a massive overhaul, Karachi’s fire brigade department’s fuel supply has been limited to emergencies only, with a regular supply of diesel cut off since last week over non-payment of dues.

The disruption of fuel supply has added to the department’s woes which is already a victim of mismanagement and neglect.

According to sources within the fire department, fuel was provided for only seven vehicles in the past week. They included one vehicle each at the fire stations of Shah Faisal Colony, Saddar, Lyari, Nazimabad, SITE, New Karachi and Bolton Market. The fuel was suspended due to nonpayment of dues.

Furthermore, the fire department has a fleet of 38 vehicles, including fire tenders and snorkels. Of those, only 14 vehicles are fit for use while the rest have been grounded for one reason or the other.

The neglect of fire tenders and vehicles, which appears to be systemic with at least 24 vehicles in need of maintenance and repair, has also compromised the efficacy of fire stations.

The source added that the aforementioned stations remain functional because all of them have at least one functional vehicle at their disposal. However, in case of a major fire incident, the designated station is reliant on reinforcements from other fire stations.

In a city with around 250 major and minor fire incidents reported per month – the mean for the first three months of the current calendar year is 241.33 – the situation is rather grave. It isn’t just that the city’s 23 fire stations are grossly under-equipped to cater to the needs of the metropolis. The number of stations isn’t enough for Karachi’s population of around 22 million, with one firefighter pointing out that there should be a fire station for every 100,000 people – almost 10 per cent of the desired capacity.

The problems aren’t limited to machinery and equipment, as the workforce has also been demoralised by what firefighters say is administrative neglect.

“While firefighters are local heroes and often achieve celebrity status in other countries, we aren’t even getting our dues,” said one source at the department who wanted to remain anonymous.

He said that their dues, including overtime, has been pending for the last 16 months while attempts to engage the administration on the issue has failed to achieve any substantial outcome.

The employees have now requested the Karachi Municipal Corporation to take notice of the present situation of the fire brigade department and to play its role in solving the problems of the department as soon as possible.