In Karachi, one woman’s kitchen empowers her on the streets

In Karachi, one woman’s kitchen empowers her on the streets

A widow become­s the source of income for her family of 12
By Kashif Hussain
Published: October 7, 2019
Tweet Email 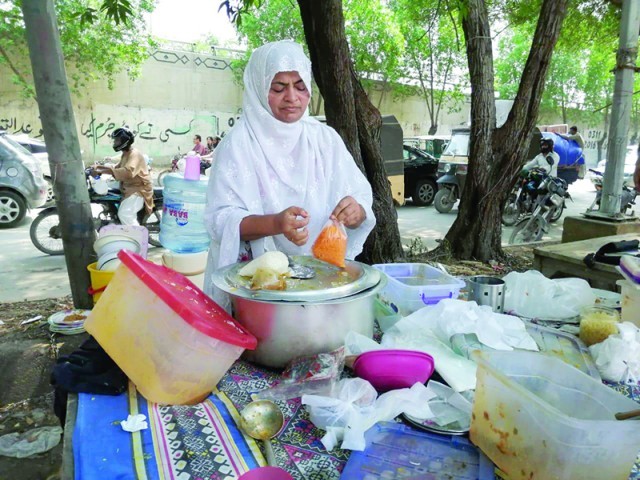 Each day Salma sets up shop on the corner of the street, selling over 16 dishes prepared with love and care to meet the financial needs of her family. photo: Express

KARACHI: Women in our society are often told that they need a man by their side for their social and economic security. Whether a father, brother, son or husband – a man’s protection is typically considered necessary for a woman’s wellbeing. One widow in Karachi is determined to rely on no one, man or woman, for her financial needs. After her husband’s death, and strain on the family’s financial resources in the days preceding the death, Salma Zubair took it upon herself to meet the needs of a 12-member household.

Salma, a resident of Gulistan-e-Jauhar, lost her husband in a road accident. Before he succumbed to his injuries, he was admitted in the intensive care unit (ICU) of a local hospital. Salma footed the bill of Rs200,000 per day in the hopes of his health improving. However, the accident had left him in critical condition and Salma was forced to bid him farewell. The money spent in hopes of his recovery had left a considerable dent in her family’s savings. Salma was left to look after the financial needs of her five sons – only one of whom was married at the time. Since then, she has married off another son, her household has expanded with daughter-in-laws and grandchildren and three of her sons are still completing their education. Their income comes from Salma’s kitchen.

From the kitchen to the street

After her husband’s death, Salma’s culinary skills became the means of her economic survival. She found employment at the canteen of an engineering university and managed to save up Rs3,000. This meager amount was invested in pots and pans, plastic containers, utensils and other culinary tools. Soon, Salma was able to set-up a roadside hotel near her house. Around 18 months ago, she began with a simple yet staple dish, daal chawal [lentils and rice], today she has over 16 dishes on menu. These include a variety of vegetables, different kinds of chicken and beef curries, and the local favourite, biryani.

Located at the end of a busy street in New Karachi, near Samama Shopping Centre, and with the most expensive item on the menu priced at Rs140, the hotel draws in customers from all walks of life. While most of her regulars are daily-wage labourers, the aroma of home cooked food often draws in working professionals and executives of nearby offices as well.

Salma sets up her day’s cooking at 11am each morning. By 3pm, the food runs out and on Saturdays, she closes shop by 1.30pm. Through the feedback and praise of her frequent customers, Salma’s roadside hotel has gained popularity, word of her cooking has spread and she now receives catering orders as well.
Salma, fondly referred to as ‘amma’ [Mother] or ‘aunty’ by regulars at the hotel, has single-handedly catered for events hosting 50-60 people.

Not a soul goes hungry

Salma is known for her generosity by those in the vicinity of the hotel. Speaking to The Express Tribune, she says that after her husband’s death, the woes of poverty became all the more apparent to her. It is part of her hotel’s policy that not one person should go away hungry.

Every customer, regardless of how little they may have in their pocket, is guaranteed a full belly when they knock on her door. Given her own constraints, however, she can’t entirely function as a charitable food counter. She facilitates her low-income customers by offering them discounts instead.

“When my children complete their education and find employment, I will no longer need to work,” says Salma. Though she beams with pride as she tells her story, she would rather be imparting her culinary skills with other women besides training them in entrepreneurship.

Her two daughter-in-laws assist her in the business venture and Salma wishes to empower other women such that they too can find their own means of financial independence. “When people offer me [financial] help, I tell them to provide resources to those with fewer means so they can sell homemade food,” she says. “I will help them learn [how to cook and sell].”

30 out of 104 ventilators at CHK remain non-functional