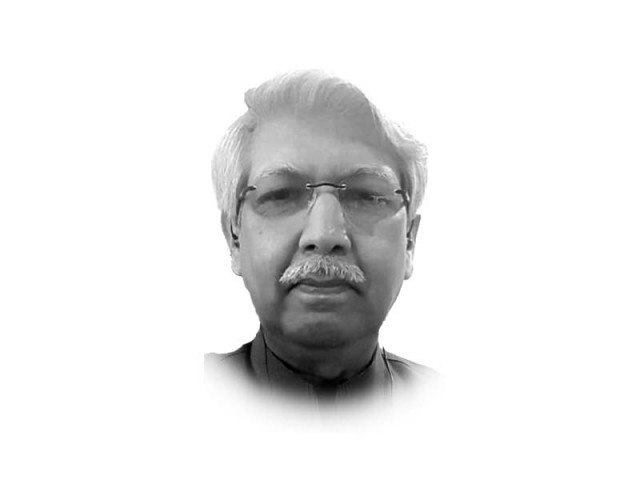 The writer is a retired air vice marshal and a former ambassador. He tweets @shazchy09

Germany was one until it was divided into East Germany and West Germany following WWII. But then when the artificiality of the order weakened over time and the Soviet Union gave in to centrifugal forces in 1990, the two reunited. Which part joined the other is well established. History suggests that a hole poked in the Iron Curtain between Hungary and Austria is wherefrom East Germans began escaping into West Germany. And when the Berlin Wall fell, all East Germans subsumed into the West.

No surprise there. West Germany had galloped ahead since the war to be among the world’s top economies, and its people enjoyed an unmatched quality of life. It retained its proud identity and reinforced it around newer principles in the New Order around a strong economic base. If there were the Permanent-5, Germany automatically took the next pedestal. The East Germans, on the other hand, were restricted in expressing their potential in a commune-defined system. East Germans thus always “escaped” into the West. It took 45 years for East Germany to gravitate into the lap of its mother entity, West Germany. It’s a slow, grinding process; centrifugal turning centripetal. Now if that’s not a lesson from history — on Kashmir, what is?

Prime Minister Imran Khan spoke passionately and touched hearts and minds. That is a lot coming from a leader of a nation afflicted with political and economic malaise. How he said what he said is not only unconventional but unprecedented. After a long time, people of the world paid attention to what was being voiced by Pakistan. That’s a huge credit to PM Imran. He created space with people, nations and institutions where none existed before. Some were into it for passion alone, some were forced to review and rethink, and some just heard Pakistan’s story for the first time. How skillfully he addressed misapprehensions about his nation and how he called out the malignant selectiveness in India’s adverse framing of Pakistan and shredded it before the world. He offered an alternative view based on logic and homed his argument in. Pakistan hadn’t been explained as well before.

There are other ways of saying the same thing — statesman(esque) — but here he was being a leader of Muslims, Kashmiris and Pakistanis. His speech can be critiqued, like anything else, but it was well-received and applauded which should make up for any discontent with his preferred form. That he premised the misperceptions on Islam to its mischaracterisation as a basis of “radical terror” — simultaneously trashing thoughts of Hindu, Christian and Jewish radical terror even as the world witnesses one or the other being the source of some outlandish violence, as in Christchurch or many parts of the United States (US) — helped punched holes in the Indian narrative which conveniently piggy-backed on the global scare of terrorism post 9/11.

That he then homed onto the foundational distortions in the mindset that Modi has spawned in a constitutionally secular India and how his Hindu ultra-nationalism has instead taken root and brought the devil out to full exposure. That it happened before the world at the United Nations General Assembly (UNGA) was a message delivered far and wide. And how this regressive thought and mindset has incarcerated eight million people under repression and subjugation was the epitome to which he called notice of the world’s conscience. It couldn’t have been formulated better or delivered better. He created space in the hearts and minds that had closed to Pakistan perpetually and made us relevant again.

Pakistan’s frontiers are all active. Kashmir and India aside, there is Afghanistan to tend to and a brewing war in the Gulf against Iran. It is the last one that should never happen. Consider the alignments that are at play: the US, Israel (in the shadows), and Saudi Arabia are all set to teach Iran a lesson, through a “Saudi-Iran” conflict. Move to our north-eastern border: the same — US is India’s ally and Israel actively lurks in the shadows. This time their target is Pakistan. Neither the US nor Israel will fight Pakistan directly, but will through India. Just reminds one of the eight-year-long Iran-Iraq war of which Iraq was never really able to recover; its present state a dismal picture. Or Syria, where after the fire was lit, it burnt itself down.

Pakistan’s established nuclear status irks many, especially those who view it with religious eyes, while that of Iran remains the greatest threat to those it stands up against repeatedly. A joint Iran-Pakistan theatre of war even when the two are distinct from each other likens to letting a fire burn both down. That is why Saudi Arabia needs to be told to not play the game of others. There are other reasons too for it — economic — else the entire world economy could go down.

We should lighten our load on the western frontier and do whatever it takes to enable peace there. Similarly, we should implore sense in both Iran and Saudi Arabia to not become fodder for international malice. Iran, Pakistan and Saudi Arabia withering themselves down under the ill-thought conflict imposed by others will weaken the three most important pillars of the Muslim world. Besides, it harms Pakistan’s national interest eternally. That is why diplomacy by Pakistan in these key areas is an effort worth every second. On India too, we must stay away from conflict else we play into the hands of others. We shouldn’t “seek” war and have no doubt that we can fend one away if imposed. A slight change in our strategic orientation is what must be factored in. Variations aside, “Defence in strength” should be our new mantra. The conventional manoeuvres can wait.

But what about Kashmir and the space that IK’s herculean effort created? Our priorities must centre around the Kashmiri people and their well-being. They need to be freed from the two-month-long incarceration and afforded the rights due to any human being. India will not roll back Article 370 but it must afford the Kashmiris the chance to speak and express themselves. Matters can be shaped thereon depending on the dynamics within Kashmir. Keeping a scale below pontification PM Imran should take the case for Kashmiris before international audiences more frequently.

Pakistan may offer Kashmiris the space to establish a government-in-exile in Azaad Jammu and Kashmir (AJK). While AJK continues to be governed under the agreed mechanisms and political process in vogue, a Jammu and Kashmir Council on behalf of all Kashmiris of the world can be retained as their formal representative till they are granted their right to their own future. Pakistan can be home to such an arrangement. Not too far, another government-in-exile function in Dharamshala, India. The Khalistanis have their own in Canada. That keeps the focus and the purpose of the struggle right and represented.

Back to the German reunification, centrifugal[ity] into centripetal[ity] is a process anchored around robust economic viability. And it can work for either side. It might take 45 years to occur but the way is known in the German example. The similarities are numerous. We just have to be wise. The struggle continues; incremental if not transformational.