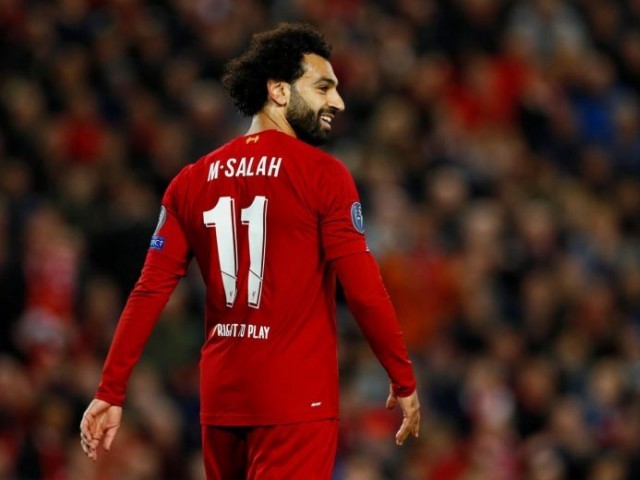 Egyptian restored order as his final goal secured the Red’s first win in their second match of the Group E campaign. PHOTO: AFP

LIVERPOOL: Mohamed Salah admitted Liverpool got complacent as the Champions League holders let Salzburg recover from three goals down before the Egypt star finally sealed a dramatic 4-3 win on Wednesday.

Jurgen Klopp’s side were 3-0 up by the 36th minute at Anfield thanks to goals from Sadio Mane, Andrew Robertson and Salah.

But the Premier League leaders took their foot off the gas and allowed Salzburg to draw level in the second half.

It was a tougher night than Liverpool expected and Salah conceded the Reds weren’t focused enough after their early goal-blitz.

“When we were winning three, we needed to score a fourth, fifth and sixth. It’s a little bit bad because the human mind says ‘OK we are going to win this’,” Salah told BT Sport.

“They made it a game for us but we are happy to get the three points. That’s the most important thing.

“I think they can be a very dangerous team. We have to just now think about each game. That is the most important thing.”

Salah was delighted to see Scotland left-back Robertson get a rare goal.

It was only Robertson’s second goal for the club since arriving from Hull in 2017.

“Finally he scored! We are happy for him. He doesn’t score a lot,” Salah said.

While Liverpool took the points, Salzburg’s battling effort made it a memorable 100th European Cup match at Anfield.

Salzburg’s teenage striker Erling Braut Haaland scored their equaliser to maintain his fine form after netting a hat-trick in the group opener against Genk.

I have no problem with Griezmann: Messi