At 19 years and 58 days, he became the third younge­st man to score a hat-trick in the Champi­ons League­
By AFP
Published: October 1, 2019
Tweet Email 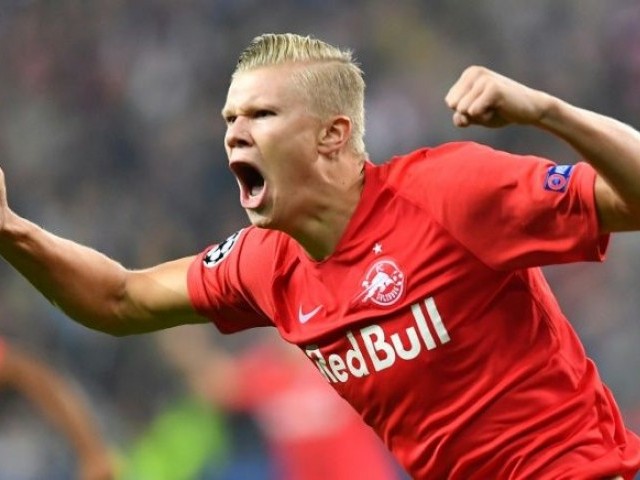 After an explosive start to Haaland's Champions League career, fans want to see more of the Norwegian. PHOTO: AFP

OSLO: Salzburg’s red-hot teenage striker Erling Braut Haaland, will have the chance to measure himself against Liverpool’s dazzling collection of attackers on Wednesday, if he is fit to play.

The Austrian club’s sporting director Christoph Freund said on Sunday that the 19-year-old has been ill and may not feature against the European champions at Anfield but there will be many beyond the confines of Merseyside who pray that he is wrong.

After an explosive start to Haaland’s Champions League career, fans want to see more of the Norwegian.

“He’s going to become one of the best strikers in the world,” said Salzburg team-mate Maximilian Woeber. “He’s just phenomenal.”

Haaland set the first round of Champions League games alight when he hit a first-half hat-trick as Salzburg pulverised Genk 6-2 to top Group E ahead of Napoli, who beat Liverpool on the same night.

At 19 years and 58 days, Haaland became the third youngest man to score a hat-trick in the Champions League since its revamp in 1992.

Imposing Haaland, who stands 1.94m tall, has been in scintillating form since moving from Molde to Salzburg in January, has scored 17 times in 10 appearances.

In May in the under-20 World Cup, he hammered nine goals in one match as Norway humiliated Honduras 12-0.

In spite of his record and his undoubted potential, Haaland is not a regular starter for Salzburg.

Five days after his star turn against Genk, he was on the bench at Linz in the Austrian League. He was not even in the squad for the two subsequent wins over Austria Vienna, one in the cup and one in the league.

The young gun is just as confident in his abilities as his teammates are.

Asked to name his favourite player by Norwegian TV he answered, with a smile: “I have to say ‘it’s me'”, before adding a slight caveat.

“Zlatan Ibrahimovic is the biggest one. He is Scandinavian, so someone has to take over from him,” he said.

His profile is inevitably attracting interest from Europe’s wealthiest clubs.

“All my life, I have dreamed of playing for one of the best clubs in the world, and I particularly like English football,” he said.

Yet Haaland has said he is a fan of his father Alf-Inge Haaland’s former club Leeds — the city where he was born in July 2000 — and wants to bring glory to a team currently loitering in England’s second tier Championship.

“The dream is to win the Premier League with Leeds,” he told a Norwegian newspaper in 2017.

Juventus and Manchester City have been mentioned as potential suitors but one intriguing link is with Manchester United which has a complex history with the Haaland family.

Haaland’s dad played for Nottingham Forest, Leeds and then Manchester City, where he was the victim in 2001 of an infamous incident where Manchester United’s Roy Keane deliberately stamped on his right knee.

“I really don’t like United and I can’t stand its players,” Alfe-Inge has said.

Yet Manchester United has a Norwegian manager, Ole Gunnar Solskjaer.

In the 2017 interview, Erling Braut explained that he had just chosen to join Molde from Bryne, rather than accepting offers from abroad, because he wanted to work with its coach at the time — Solskjaer.

“He had a very big impact on my life,” said Haaland said recently of his time at Molde.

“He is one of the reasons why I’m here today. He is a good person and a good coach.”

Solskjaer, who admitted on Monday that he is in the market for strikers, returns the admiration.

“It’s great watching him and I think everyone in Norway is excited by his development,” he said following the hat-trick against Genk.

The youngster is planning ahead. He changed his surname to the anglicised “Haaland” from the traditional Norwegian spelling, to make it easier for the media and international big clubs to write down.

A big performance at Anfield, so long as he is healthy and ready to play, will have them reaching for the hyperboles.

Vertonghen not distracted by speculation on Spurs future