5.6 magnitude earthquake was 10 kilometres deep: chief meteorologist. PHOTO: REUTERS
MUZAFFARABAD: A devastating earthquake rattled Azad Jammu and Kashmir (AJK) on Tuesday resurrecting the haunting memories of a monster tremor that had wrecked the region 14 years ago.

The shallow 5.6-magnitude earthquake – which also jolted several cities of Punjab and Khyber-Pakthunkhwa (K-P) – left at least 30 people dead and over 350 wounded, according to disaster management officials.

The epicentre of the quake, which occurred at around 4pm at a depth of only 10 kilometres, was near Mirpur city in AJK, roughly 20 kilometres north of Jhelum in Punjab, according to the US Geological Survey.

The areas worst hit were Mirpur city, a small town Jatlan and two villages Manda and Afzalpur, where buildings and homes collapsed, trees were uprooted and cracks appeared on roads large enough to swallow cars. 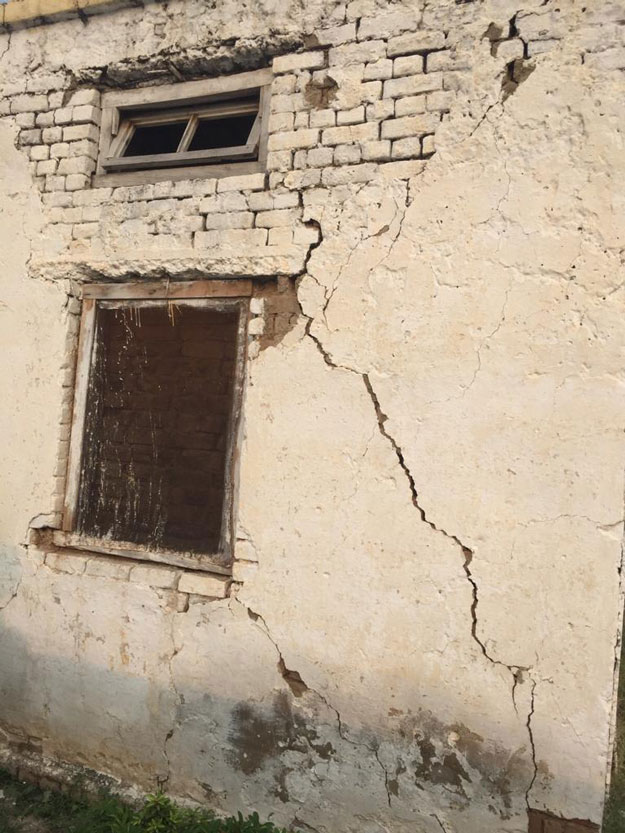 How does the depth of an #earthquake change the shaking that's felt on the surface? https://t.co/EWFXAqfRmT pic.twitter.com/XlyhvnE3oX

The earthquake sent people racing out of buildings and homes in these cities.

“Eleven deaths have been reported in Jatlan and nine in Mirpur alone,” he added. Other people died in the areas located between Mirpur and Jari Kas.”

The SDMA official said the number of casualties was likely to increase as around 100 of the injured were admitted to different hospitals in a critical condition.

Muhammad Safdar, 60, who lives near Mirpur, said he was in his house when it suddenly started shaking. "We saw walls and the roof developing cracks and ceiling fans and other articles falling down, and we rushed out into an open field," he told Reuters. "I have never seen such a devastating earthquake in this area in my life." 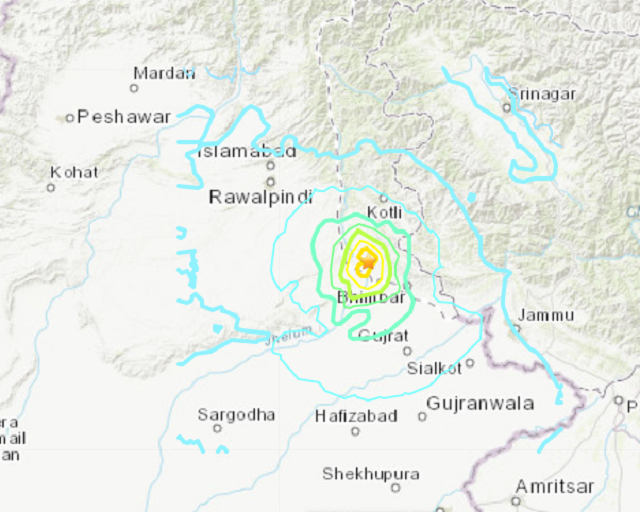 Police official in Mirpur tells BBC Urdu that at least 4 people have been killed and 50 injured following the earthquake in Pakistani Administered Kashmir... a local man from Jatlan village said these photos of the damage circulating on social media are correct pic.twitter.com/kulurgd0E4

Ramzan Ahmad, 65, who suffered a head injury and bleeding nose, said he was with his family of seven when his house collapsed. "We all got injuries," he said. "I saw dozens of houses razed on my way to the hospital."

Naeem Chughtai, a Mirpur resident living near the city's main hospital, told AFP that area's infrastructure, including roads, mobile phone towers, and electricity poles, had been badly damaged by the quake.

According to reports, a breach in the Upper Jhelum Canal caused by the earthquake inundated a number of villages along the Jatlan Road, around 140 kilometres south of Islamabad. The earthquake also damaged two pedestrian bridges over the canal, making it difficult for the locals to cross over. 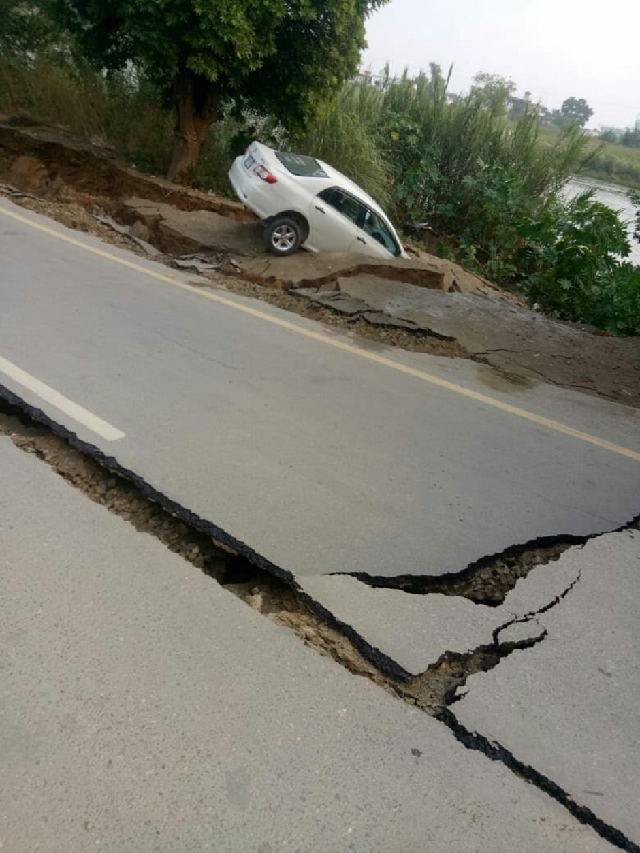 Wide ruptures appeared on roads in Jatlan, plunging several vehicles on the road into the fissures, while large cracks appeared in the adjoining fields. Many vehicles also fell into the canal

Many people were injured when a building collapsed in Mirpur and shifted to a nearby hospital, the city’s deputy commissioner told reporters.

“Various government departments, relief organisations and people from the adjoining areas of Bhimber, Kotli and Dina in Jhelum have started rescue and relief activities in affected places,” said Sajid Dilawar, the manager of the Kashmir Relief Trust.

“But there is not enough heavy machinery and that is hampering rescue operations,” he added.

“Army troops have reached earthquake-hit areas of Mirpur, Jatlan and Jarikas. Relief and rescue efforts are under way,” it said in a statement.

In an update issued later in the day, the ISPR said the damage assessment based on aerial and initial physical survey had been completed. Quoting the civil administration’s record, the military’s media wing placed the death toll at 22 and the number of the people injured at 160. It added that an army soldier was among the casualties.

“Three communication bridges near Jatlan have been damaged and the Jatlan-Mangla has become unusable. Medium to minor damages to weak/old structures in Mirpur, Jatlan and Jari Kas have been observed,” it noted.

“Army teams are continuing rescue and relief efforts in coordination with other stakeholders. Teams of army engineers with equipment are undertaking immediate repair work on Jatlan- Mangla Road and the bridges in Jatlan. Doctors and paramedics are providing necessary medical care. Rescue efforts will continue through the night.”

What's the difference between #earthquake magnitude and intensity? https://t.co/EWFXAqfRmT pic.twitter.com/NhYgNKs497

“The NDMA is already providing medicines, food items and tents, which were in its stock in the affected areas, to the victims,” he added.

“The AJK State Disaster Management Authority teams were the first to reach the affected areas while teams of other rescue institutions, engineers of the Pakistan Army and the NDMA, have also arrived there to take part in the rescue operation.”

The NDMA chairman said the authority was trying its best to provide all the required items to the affected people as soon as possible. “Rain is expected during the next two days, which might add to their problems,” he added.

He said some details of damaged property were pouring in from villages in Bhimber and three major bridges in Mirpur district were also affected. “A proper damage assessment of houses will be carried out in a few days.”

According to a statement issued by the spokesperson for the Water and Power Development Authority (Wapda), the earthquake did not cause any damage to Mangla Dam and its powerhouse.

Prime Minister Imran Khan has directed all departments concerned to provide immediate assistance in carrying out relief activities in the quake-hit areas.

AJK President Sardar Masood Khan and Prime Minister Raja Farooq Haider Khan have expressed their deep grief and sorrow over the loss of lives and the heavy loss to the infrastructure and public properties.

Haider cut short his Lahore visit and departed for Mirpur to supervise rescue and relief efforts.

“Our whole concentration right now is to accelerate the rescue operation,” he told a private TV channel. “There are people who are stuck there and who need immediate help. We are putting in all our resources to assist the affected people.”

Punjab Chief Minister Usman Buzdar has imposed emergency in Jhelum, directing the authorities concerned to stay alert to cope up with the situation. In a tweet, he said the district commissioner had been directed to visit the affected areas and dispatch medical aid.

Tremors were felt as far as New Delhi, while the Press Trust of India reported that people rushed out of their homes and offices in panic in several places, including in Rajasthan, Punjab and Haryana.

Pakistan straddles part of the boundary where the Indian and Eurasian tectonic plates meet, making the country susceptible to earthquakes.

ECP responsible for acting according to law and using EVMs: Fawad