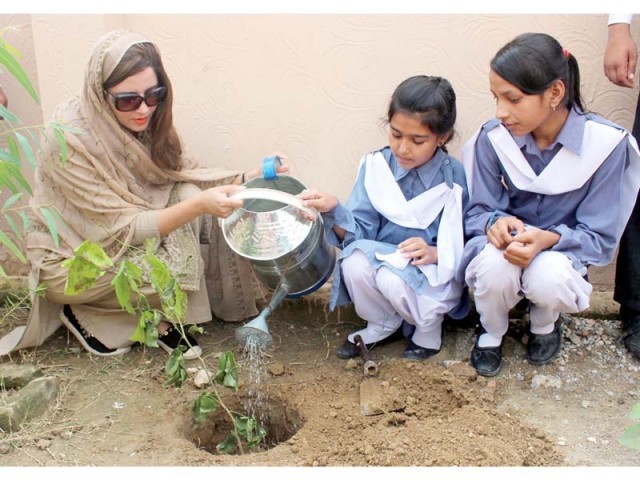 ISLAMABAD: Reusable bags were distributed and trees were planted in the federal capital on Monday as part of a Social Good Summit.

“Students are a great agent of change,” Wazir said, adding, “If you love Pakistan, keep Pakistan clean and green and plant a tree.”

Saplings were then provided to students by UNDP and they planted them in their school’s ground. Students also took an oath to care for the saplings which they had just planted.

While planting the sapling with the students, UNDP Resident Representative Ignacio Artaza pointed out that Pakistan is among those countries most at risk from climate change.

“Pakistan is amongst the top eight countries suffering from the impact of climate change,” Artaza said, adding, “UNDP wants to invite young people to take action to address climate change.”

“Progress to overcome climate change can only take place when we all get involved.”

The Shimshal native regaled students with her tales of mountaineering.

“We all should contribute to the environment, and tree plantation is important for our future,” Baig said.

Later, reusable bags were distributed amongst the students. The students then joined the UNDP team in distributing the bags to the general public in market spaces in Islamabad.

The Social Good Summit (SGS) was launched a decade ago to bring together global thought leaders, new media and technology experts, grassroots activists, and influential voices for constructive dialogue and on-stage activations.

Hospitals run out of space