Over a third of Pakistani children miss out on vaccines

Over a third of Pakistani children miss out on vaccines 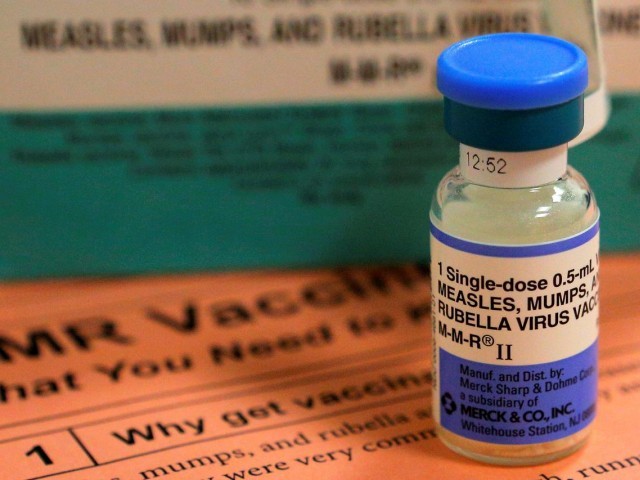 KARACHI: Across the world, more than 20 million children fall prey to various diseases each year simply because they are not vaccinated against. Unfortunately for Pakistan, it is one of those countries that boast large numbers of such children, many of whom eventually lose their lives to diseases which they could easily have been immunised against.

While the developed world has eradicated at least 10 deadly diseases among children through a thorough vaccination programme, in Pakistan, more than a third of children miss out on vaccines, according to a government report. Only 66 per cent of children aged between 12 and 23 months received all basic vaccinations in 2017-18 and just 51 per cent received all age-appropriate vaccinations, revealed the Demographic and Health Survey 2017-18.

In Sindh, overall vaccination coverage was a shockingly low at just 45 per cent in 2017, according to a report compiled by the Pakistan Pediatrics Association (PPA). Officials of the Expanded Programme on Immunisation (EPI), however, insisted that they have been able to improve coverage to about 80 per cent.

“The EPI is offering free vaccination for 10 deadly diseases among children, however, a general lack of awareness, ambiguity regarding the effectiveness of vaccines and various myths stop people from administering protective vaccines to their children,” an EPI spokesperson told The Express Tribune.

Across the world, most children who are deprived of vaccines belong to developing countries such as Pakistan, Afghanistan, India, Congo, Ethiopia, Iraq, Nigeria, Somalia, Sudan, Syria and Yemen, a recent UNICEF report reiterated.

“As much as 99 per cent of all deaths that occur due to pneumonia take place in developing countries,” noted Pediatrician Department head Professor Jamal Raza. “Pakistan, along with Bangladesh, India, and Indonesia, is among the countries where pneumonia-related deaths are high,” he said, adding that over 590,000 cases of pneumonia turn fatal across the world every year.

Pakistan was among the first developing countries to partner with the GAVI Vaccine Alliance to launch a national vaccination programme. The country launched its first national vaccination initiative in 1980 and administered a vaccine which immunised children against six diseases. The programme, in the years since, has expanded to immunisation against 10 diseases. Starting from November this year, the vaccination programme will also cover immunisation against typhoid, EPI officials said.

Special courts set up for disabled persons in Sindh