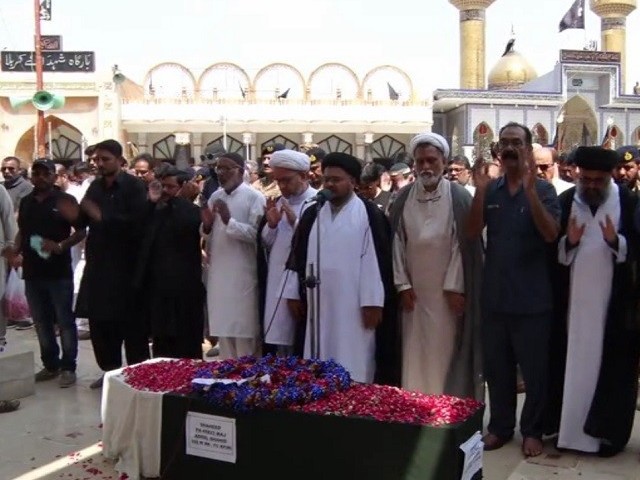 Funeral prayers of Major Adeel Shahid and Sepoy Faraz Hussain, who embraced martyrdom along the Pak-Afghan border in Mohmand district yesterday, were offered in Karachi and Kotli respectively on Saturday, the military said.

Sindh Chief Minister Murad Ali Shah, the Corps Commander and a large number of people attended the prayers for the martyred officer, who was laid to rest with full military honour, said a statement issued by the Inter-Services Public Relations (ISPR).

Serving officers, soldiers and general public in huge numbers also attended the funeral prayers of Sepoy Faraz Hussain, who was also buried with full military honour in his native town of Kotli, it added.

The two Pakistan Army personnel were martyred while their squad was supervising the fencing at the western border. They were targeted through an improvised explosive device (IED) planted by terrorists from across the border.

“Squad under shaheed officer was supervising fencing work in an area which carried critical infiltration route [used by terrorists from Afghanistan],” the military’s media wing said on Twitter.

Talking to The Express Tribune over phone, a senior security source said the incident occurred at Manzari Cheena village of Tehsil Baizai in district Mohmand near Gorsal border post.

“The security convoy was traveling to Gorsal Gate for security checking and also to witness the activities at the Pakistan-Afghan border when their vehicles were hit by the IED at around 10:30 am,” he said. He added the blast was so powerful that it also damaged the nearby buildings.

Militant activities are on the rise in some areas of North Waziristan, South Waziristan and Mohmand tribal districts. Security forces have carried out several operations in district Buner of Malakand Division in the last few weeks. Local police have also recorded militant activities in Elam area of Buner.