Climate conditions in the region have claimed lives of hundreds Pakistani and Indian soldiers since 1984
Anadolu Agency September 18, 2019 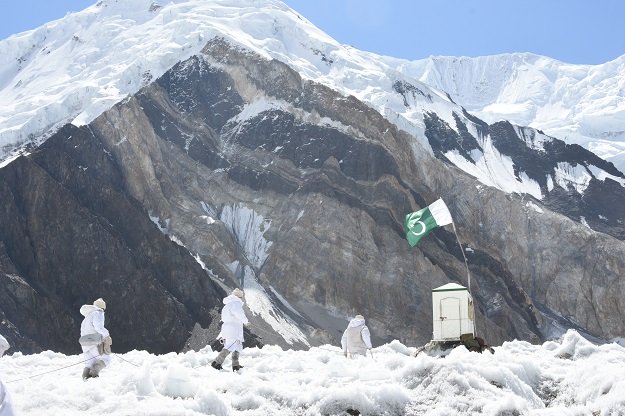 SIACHEN, PAKISTAN- SEPTEMBER 16: Pakistani soldiers patrol where India and Pakistan both claim the area and have thousands of soldiers stationed there in Siachen, Pakistan on September 16, 2019. At a height of up to 8,000 meters, Siachen is regarded as the world's highest battlefield due to military conflict between India and Pakistan which was started in 1984. Military life in the region is viewed by Anadolu Agency for the first time in international media. PHOTO: Anadolu Agency
The Siachen Glaciers, known as the world's highest battlefield, are located in the eastern Karakoram mountain range in the Himalayas, huddled next to the borders of Pakistan, India, and China.

The South Asian neighbours and rivals Pakistan and India both claim sovereignty over the entire Siachen region.

According to Pakistan army officials, before 1984, there was no military presence on the glaciers, but in April 1984, the Indian army initiated a secret operation and captured some top posts at the Siachen glaciers and approached the eastern Karakoram mountain range, which compelled Pakistan to move its troops into the strategic region of northern Kashmir. 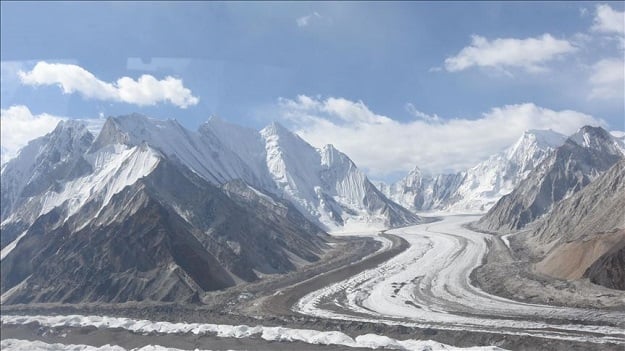 A view from Siachen glacier, where India and Pakistan both claim the area and have thousands of soldiers stationed there in Siachen. PHOTO: Anadolu Agency

Since then, both countries' troops are stationed in Siachen, although a cease-fire came into effect in 2003.

This September, Anadolu Agency sent the first-ever international media outlet team to visit several sectors of the Siachen glaciers and stayed there to observe how troops spend days and nights in such a harsh environment.

The agency team first visited the Pakistan Army’s International Hiking and Altitude Expedition Camp (IHEC) and Concordia posts in the Baltoro Glacier sector. The IHEC and Concordia posts are located at an altitude of around 4,877 meters (16,000 feet) to 5,182 m (17,000 ft), while some posts are located at around 6,100 m (20,000 ft), with average temperatures of around minus 15 C throughout the year, plunging down to minus 50 C in the winter.

Pakistani soldiers wear special snow gear, jackets, caps, boots, and glasses to protect themselves from harsh weather conditions, as the cold wind always blows in from the glacier region.

"We can't venture outside without these special clothes due to the wind chill and lack of oxygen," a soldier told Anadolu Agency on condition of anonymity.

Being posted in a glacier region means preparing for a struggle with nature as the weather, rather than the bullets, is the biggest enemy for Pakistani and Indian soldiers in the Siachen region.

The soldiers stationed here can be seen with guns in hands, always standing vigilant and keeping eyes on the enemy despite the cold blowing wind in the world's highest battlefield. 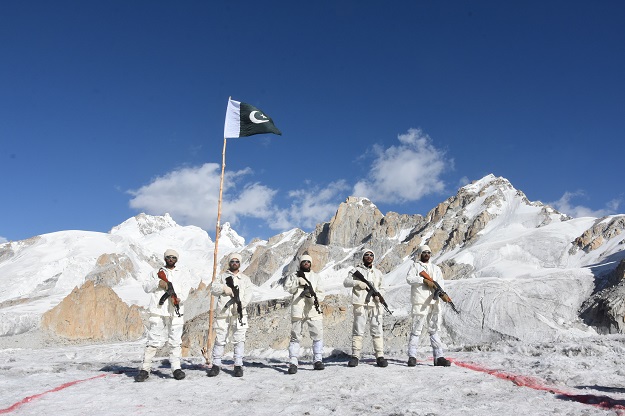 The region is also called the "mountaineers' paradise," as five of the world's 8,000-meter-plus peaks are located in Pakistan’s Gilgit-Baltistan region, including K-2, the world's famed second-highest peak.

Nanga Parbat, also known as "Killer Mountain" -- the world's ninth tallest mountain with a height of 8,126 m (26.660 ft) -- is located in the Himalayan range. It has never been climbed in the winter.

Many foreign climbing expeditions enter through the Baltoro sector to reach the K-2 base camp, where they plan for next destination to summit the highest peaks.

According to local Pakistan army officers in Baltoro, they help the climbers whenever they need or rescue them if anyone gets stuck during an expedition.

The Gayari and Gyong sub-sectors feature several high-altitude observing posts in the Siachen region, including the Ibrahim post at an altitude of 5,639 m (18,500 ft) and the Yousaf post located around 5,791 m (19,000 ft) high, among the highest locations on the Pakistani side of Siachen.

The Pakistan army provides its soldiers standard food in line with medical requirements at these high-altitude posts.

"Last night we couldn’t get to sleep as we were eagerly waiting for your arrival," one officer said, warmly welcoming the Anadolu Agency team.

The officers and soldiers posted in these areas couldn't meet with other colleagues or relatives for several months due to isolated conditions.

As per standard army operating procedures, the soldiers and officers are deployed for 21-30 days at the highest posts, but sometimes in winter they may stay longer when all routes are closed due to snow and blizzards.

The soldiers’ deployments in these highest posts is also a tough job. From base camp, they walk for two weeks to a month to reach their posts. The army has dozens of posts situated two or three kilometers from each other in every sector from base camp to the top.

The soldiers slowly ascend to the top and stay for a day or two or sometimes four to five days at the military posts, in order to get acclimatized. There is no road connectivity on either the Pakistan or Indian side to the top of the glaciers.

During their movement, a team of eight to 15 soldiers links up using ropes to protect each other from falling into crevices. 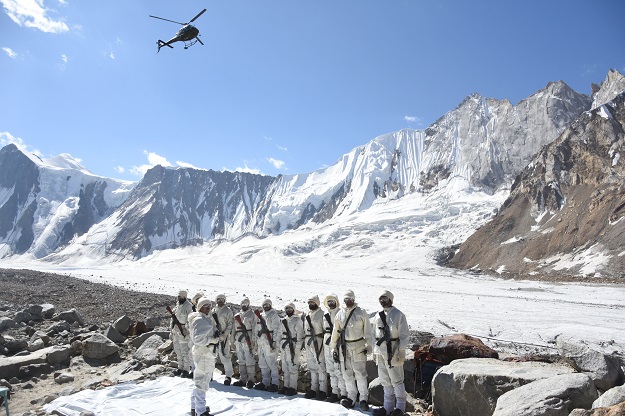 Glaciers and crevices a big threat

The glacier and crevices are big threat for soldiers in this region. Soldiers can fall into crevices during routine movement in unforeseen blizzards.

The Siachen glaciers are full of crevices.

"We always move in a group tied by a rope which helps us protect each other from falling into crevices," said an Army officer in the Gayari sector.

According to local officers, since 1984 over 150 Pakistani soldiers and officers and over 100 porters have lost lives in only the Yousaf and Ibrahim sectors due to crevices and glaciers.

Officers and soldiers moving from one army post to another using the dangerous and narrow mountain routes always face the threat of falling in the glacier.

"Mostly we move at nighttime as the risk of falling is always less than in the daytime," a local official said.

Getting essential food and weapons supplies to the highest military posts is another difficult job on both the Pakistani and Indian sides, costing millions of dollars daily.

They use helicopters to drop the supplies to difficult posts in winter. But in summer they use porters and mules to dump essential items to forward positions.

The pilots who drop the supplies near high-altitude posts are well-trained.

The local porters help the army taking supplies to the sector's semi-base camps and highest positions.

Life at the top of the world

Life is not easy on Siachen's glacier due to harsh weather. The army has arranged high-altitude clothing, caps, gloves, boots, and glasses to protect the soldiers from hostile weather conditions. Inside they use stoves to warm up, with temperatures of minus 10-15 C in summer while in winter it plunges down to minus 50 C. Annual snowfall at the highest positions totals around 35 feet.

The army provides precooked food for all posts, while in summer fresh meat and vegetables are also airlifted for them.

"We face no food issues while also having all the necessary items to protect ourselves from harsh weather," said one soldier. 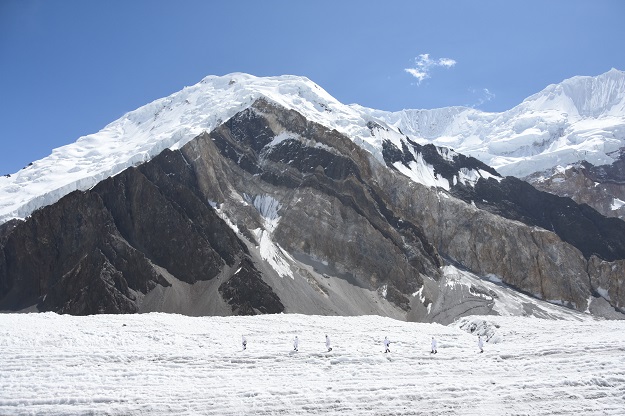 SIACHEN, PAKISTAN- SEPTEMBER 16: Pakistani soldiers patrol where India and Pakistan both claim the area and have thousands of soldiers stationed. PHOTO: Anadolu Agency

Water availability is a big issue in Siachen, as there is no spring water available in most sectors. Soldiers boil snow for drinking water, as more water intake is necessary to avoid dehydration.

Kerosene oil is the only fuel good for helping soldiers with heaters and stoves.

The soldiers and officers live in the same igloo irrespective of rank. For entertainment, the officers and soldiers play games like Ludo. Sometimes they also hold singing parties at their posts.

A soldier told Anadolu Agency that they hold celebration when their new colleagues join them and arrange a special food party in honor of newcomers.

"We really enjoy life here despite harsh weather, as we are protecting our motherland and making sacrifices for our country and nation," another soldier said.

Pakistan is our love and life and we can sacrifice our lives for this country, the young soldier added.

Nature, not bullets or mortar fire, is the real enemy in Siachen. The harsh weather condition caused various ailments among Pakistani and Indian soldiers stationed at high-altitude ranges from 2,743 m (9,000 ft) to 6,706 m (22,000 ft) feet.

According to military doctors, speaking on condition of anonymity, harsh weather is the big enemy in Siachen.

"The common problem soldiers face in Siachen are HAP [high altitude pulmonary], which can even cause cardiac arrest due to blood clotting, as well as weight loss, hypothermia, frostbite and chilblains," said one military doctor.

Soldiers going from low-lying areas work to get acclimatized to avoid the risk of HAP. They go through three stages of acclimatization between 2,438 m (8,000 ft) to 4,877 m (16,000 ft) to get their lungs accustomed to living in a low-oxygen environment, he added.

Climate conditions in the region have claimed lives of hundreds Pakistani and Indian soldiers since 1984. According to Indian Defense Ministry documents, 869 Indian soldiers including 33 officers and 54 Junior Commissioned Officers have lost their lives.

The year 2012 saw a tragic loss of life in a single incident when 140 Pakistan army soldiers were buried in an avalanche in the Gayari sector.

Pakistan erected a monument to remember all those who lost their lives in that tragic incident.

According to the BBC, Pakistan and India have lost over 2,500 soldiers since the conflict started in April 1984, and over 70% of all deaths at Siachen have been due to the harsh weather and terrain.

Since 1984, the presences of thousands of Pakistani and Indian soldiers have caused the glaciers to melt faster while also making them more polluted, as the trash they leave on glaciers could not be retrieved due to high altitude and extreme weather.

A 2017 Pakistani meteorological reports warned that Himalayan glaciers have been shrinking for the past 30 years, with losses accelerating to alarming levels in the past decade. It suggested the Siachen glaciers are like a natural dam which could save Pakistan and India for future generations.

Speaking to the UN General Assembly in 2015, then-Pakistani Prime Minister Nawaz Sharif called for the total withdrawal of Indian and Pakistani forces from Siachen to save the glaciers from further destruction, but as in the past, India rejected this Pakistani proposal.