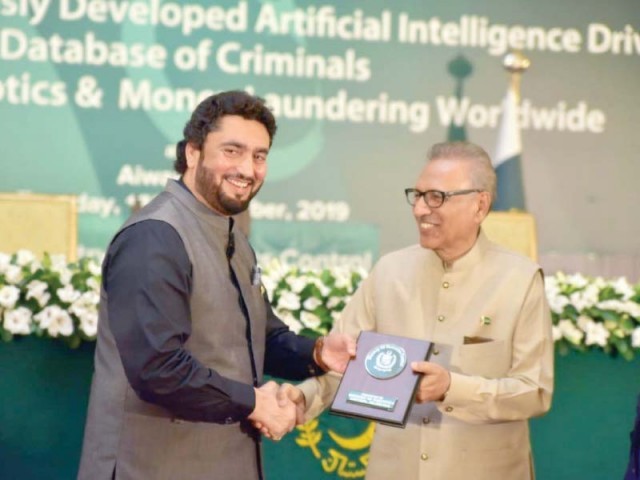 President Arif Alvi awarding State Minister for Narcotics Control Shehryar Afridi with a shield for the initiative of establishing the databank. PHOTO: EXPRESS.

ISLAMABAD: The production of drugs, natural and synthetic, in the region poses a threat to human lives in a country like Pakistan where drug use increased following the Afghan war. Hence, there is a need to take greater steps to not only keep drugs out of the hands of users but also to provide better rehabilitation and treatment facilities to addicts.

This was stated by President Dr Arif Alvi on Tuesday as he launched the country’s first-ever, an artificial intelligence-based national database on individuals and organisations which are involved in heinous crimes such as drug smuggling, money laundering and human trafficking.

Addressing the launch ceremony of the ‘Am’aan’ project at the Aiwan-e-Sadr, Dr Alvi said that the prevalence of narcotics across the globe still poses a threat to human lives and stressed upon focusing on preventive methods to keep drugs out of the reach of addicts as part of long-term curative measures.
Police arrest eight suspects, recover drugs and weapons

Noting that narcotics control remains a complex challenge, he noted that the database was a much-needed project. He hoped that by tapping into the potential of artificial intelligence, they could better control drug abuse.

The president further said that the emergence of synthetic drugs had had a monumental impact, particularly in western countries, causing deaths and destroying families.

In the Pakistani context, he said that drug use saw an exponential rise after the Afghan war. He added that Afghanistan remains a major source of narcotics today.

To counter drug addiction, Dr Alvi observed that there should be adequate health centres which offer proper treatment. The best way to tackle addiction, he said, was to keep drugs away from addicts.

The president noted that early diagnosis of drug addiction, like any disease, was crucial for effective treatment.

He also noted with alarm that a large number of students were using some kind of addictive drugs.

Syed Tajammul Hussain, who developed the data bank, gave an overview of the project.

State Minister for Frontier Region and Narcotics Control Shaheryar Afridi said that his team had been working on this project for the past 15 months.

“After hectic efforts, this project is being handed down to the Anti-Narcotics Force (ANF) and the ministry to make good use of it,” Afridi stated.

Elaborating on the main features of the database application, the minister said that this is one of the world’s largest Artificial Intelligence-driven databases. He added that it will collect information regarding individuals and organisations who are involved in criminal activity. A team of experts will “continuously collect, evaluate and verify the data from multiple sources from around the world to ensure the efficacy of the solution.”

He added that the application performs various operations to consolidate data into a single repository.

“The data in this solution updates in less than 10 minutes. New features of this project, which are under development, include facial recognition and smart search and it will make the ANF one of the most effective forces in the region,” he said.

Afridi said information from this database will be shared with other law enforcement agencies and government bodies involved in curbing money laundering, drug and human trafficking.

“We are now monitoring more than 200 global government agencies and have tagged more than 100 drugs and over 20 chemicals which can be used in the production of narcotics,” he said, adding that billions of dollars flow through the hands of drug trafficking organisations each year and what they do with that money can have a huge impact on local and global economies.

The state minister said that drug money can either be smuggled out of their home country or used to create alternative wealth such as real estate, invest in restaurants and casinos to whiten it.

“It is mandatory for the local government to take necessary steps to control drug-related crimes. Project Ama’an is designed to tackle illicit drug trafficking in Pakistan. It collects the data from a variety of local and global sources,” he added.