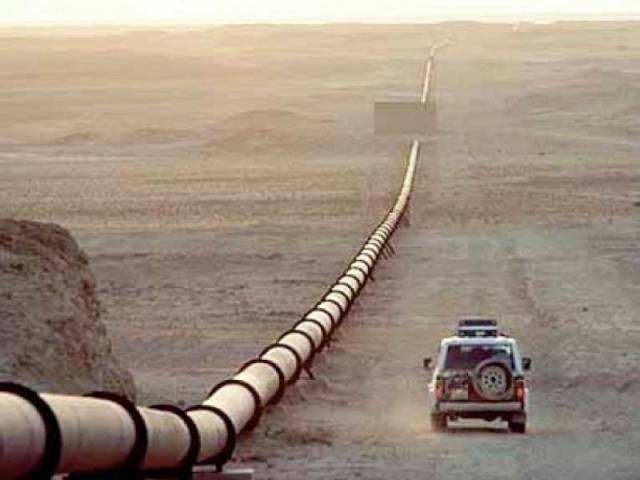 ISLAMABAD: Some quarters raise doubts about the future of the Turkmenistan-Afghanistan-Pakistan-India (Tapi) and other offshore gas pipeline projects in the wake of rising tensions between India and Pakistan over the disputed territory of Kashmir.

“However, Pakistan has assured Turkmenistan that rising tensions with India will have no effect on the mega project,” a government official has told The Express Tribune.

Interstate Gas Systems (ISGS) is working on some big pipeline projects including Tapi, North-South Pipeline and Offshore Gas Pipeline.  In addition, the company also plans to set up underground gas storages to ensure energy security through load management in the country.

Tapi, a peace pipeline project, promises connectivity between Central and South Asia. It will pass through war-torn Afghanistan and Pakistan to India to boost economic activity and to ensure peace and stability in the region.

The construction work has already started in Turkmenistan and is expected to start soon from Turkmen-Afghan border to Herat section, the official said, adding that construction activities in Pakistan are set to kick off during the first quarter of 2020.

“There has been tension between Pakistan and India over Kashmir. However, this will not affect TAPI pipeline project,” the official said. European banks and firms had been shortlisted for provision of pipeline material and EPC contract.

“Tapi Company is responsible for the execution of this project. However, Pakistani companies are assured to get maximum share in the work within Pakistan,” the ISGS Managing Director Mobin Saulat said.

He said a delegation of Tapi Company would visit next month to review the progress of the project and finalise the plan for construction. Each Pakistan and India would receive 1.3 billion cubic feet per day (bcfd) gas.

This is another pipeline project being dealt by the ISGS that will run from Karachi to Lahore to transport imported gas. At present, two LNG terminals are operational in the country and government has allowed five more private sector companies to build LNG terminals at Port Qasim that would also require the pipeline to pump gas from Karachi to Lahore.

This project would be executed by Russian firm on a government-to-government deal under BOOT model wherein the Russian firm would provide funding for this project. The project has been delayed due to sanction issues but the work on it is being pursued now.

“The intergovernmental commission (IGC) between Pakistan and Russia will meet in soon to review project’s progress,” Mobin Saulat said. “The project would ensure the transportation of additional LNG into the system.”

Russian energy giant Gazprom wants to execute the project that would go from Pakistan to India, Bangladesh and then China with Russian gas sources in the Persian Gulf. Pakistan and Russia have already signed MOUs to conduct a feasibility study of this project.

According to reports, in a meeting between Russian President Putin and Indian Prime Minister Narendra Modi, the latter had assured the former that they had no objection to the project.

However, some quarters say the implementation of the plan also depends on improved relations between Pakistan and India.  But government authorities cast off doubts saying not only Pakistan needs Tapi and offshore gas pipeline projects but the energy-starved region needs them.

The ISGS also plans to build underground storages to stock gas as strategic reserves. The Asian Development Bank has committed to provide technical assistance to conduct the feasibility study.

“We have identified some depleted gas fields with huge storage capacity that could store gas,” Mobin Saulat said, adding that “neighbouring countries like Iran and India also have underground storages and Pakistan also needs storages for better gas load management besides serving as strategic reserves”.

He added: “We are working on different models to ensure the most economical option and many renowned entities have already expressed interest in the development of these storages.”