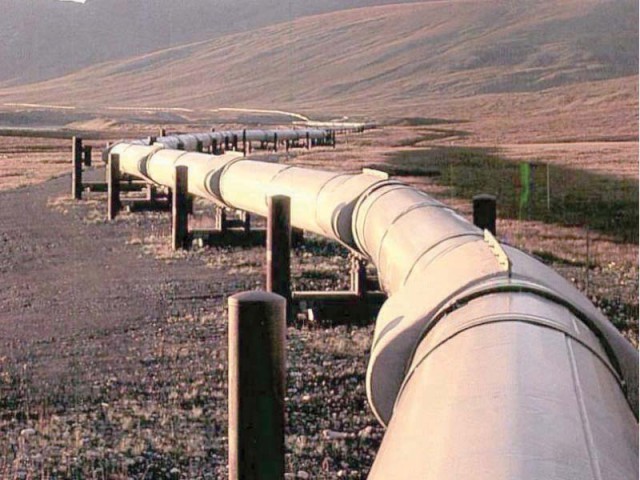 Tapi and offshore pipelines may prove to be a game changer for Pakistan's energy landscape and will give a push to the economy. PHOTO: FILE

ISLAMABAD: Two planned gas pipeline projects – one originating in Turkmenistan and the other running offshore with cumulative worth of $20 billion – are believed to diversify sources of energy supply and ensure energy security in Pakistan.

The civilian and military leadership of the country are on the same page, supporting the pipeline projects, which may be an energy card amid intensifying conflict between the US and Iran in the Middle East. These projects will also provide an opportunity to connect different regions and bring peace in Afghanistan as they will generate significant economic activity.

Pakistan is working on the Turkmenistan-Afghanistan-Pakistan-India (Tapi) pipeline and an offshore pipeline with the help of Russia. On the other hand, the US has been pressing Pakistan to stay away from the Iran-Pakistan (IP) gas pipeline project – left in limbo for years – and instead import liquefied natural gas (LNG) from Qatar.

The Tapi and offshore pipelines will serve as alternative energy projects for Pakistan in order to reduce reliance on gas imports through ships and neutralise US role in energy politics. It is important to develop the two projects because they will help improve the country’s energy security and reduce reliance on Gulf states, which are trying to play the energy card and influence the political scene in Pakistan.

The current government of Pakistan Tehreek-e-Insaf (PTI) has an opportunity to overcome energy shortages by laying these pipelines. This will give a trump card to Prime Minister Imran Khan in next general elections.

Natural gas is cheaper by 10-15% compared to LNG and its supply through Tapi pipeline will generate transit fee for Pakistan as the pipeline will extend to India. The project will also create jobs for people in Afghanistan and pave the way for peace there.

The Strait of Hormuz is a strategic sea route that links Middle Eastern crude producers with key markets in the Asia-Pacific, Europe, North America and beyond.

Saudi Arabia, Iran, the United Arab Emirates (UAE), Kuwait and Iraq export most of the crude oil through this passageway. Around 65% of all crude and condensate passed through the Strait of Hormuz and went to five markets of China, India, Japan, South Korea and Singapore last year.

Pakistan imports oil from Kuwait, Saudi Arabia and the UAE. The Strait of Hormuz is also the supply route for nearly all the liquefied natural gas (LNG) shipments from key exporter Qatar. Pakistan is currently importing 500 million cubic feet of LNG per day (mmcfd) from Qatar.

Since 2015, Pakistan has become an LNG importer to meet domestic energy needs. LNG imports have helped overcome energy shortages. In case of oil, the country meets around 85% of its requirement through imports.

Recent tensions between Iran and the US in the Middle East have raised concern over energy supplies. If the tensions deepen, oil and gas imports by Pakistan may come to a halt, which will pose a threat to energy security.

Pakistan is a net importer of oil and its reliance on LNG imports has also grown following a dip in production of natural gas. In this situation, pipelines are the best option to ensure energy security in the country. Pakistani civilian and military leadership is pushing to implement the pipeline projects in the face of tensions in the Middle East. Tapi project is at an advanced stage and construction work on the pipeline has started in Turkmenistan.

The beginning of construction work on the project in Pakistan is expected in October this year. Tapi Company has shortlisted some companies including prominent European names for building the pipeline. Financial close of the project is expected to be achieved by the end of this year.

“Groundbreaking of the project will take place in Pakistan soon. Pipeline gas is still cheaper and will help overcome energy shortages,” he said, adding that route of the pipeline had also been approved.

Pakistan and Russia inked a deal in September last year for conducting feasibility study on the planned $10-billion offshore gas pipeline. Russia’s energy giant Gazprom will undertake the study by utilising its own resources and will build the pipeline.

The project is strategically very important as it will connect the two distant countries. Close ties between Pakistan and Russia will also help the former to gain access to the Russian market in order to boost overall exports, which remained stagnant during the five-year tenure of the previous Pakistan Muslim League-Nawaz (PML-N) government.

These two projects – Tapi and offshore pipelines – may prove to be a game changer for Pakistan’s energy landscape and will give a push to the economy. They will ensure energy security and provide alternative options for cheaper energy supplies to Pakistan.

Kremlin says WTO will be in doubt if US left