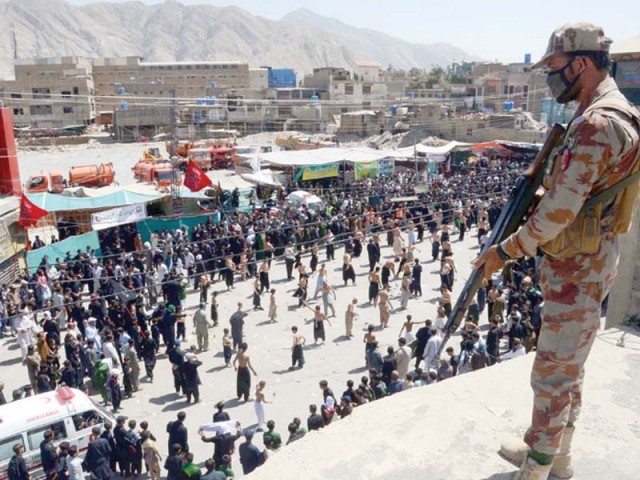 QUETTA: Like other parts of the country, law enforcement agencies had ensured strict security arrangements for Ashura processions throughout the city.

Security officials were stationed at strength at all routes entailing religious rallies. In addition to 5000 police officers deployed at various routes, a large number of security officials from Frontier Corps (FC) and other law enforcement agencies performed duties for Ashura rallies.

Roads with high-security risks were sealed with barbed wire while trucks were placed as blockades for streets and lanes leading to the routes and areas adjoining Qandhari Bazar, Liaquat Bazar, Prince Road, Mekangi Road and Kansi Road.

Law enforcers also made use of CCTV cameras to monitor security arrangement at the procession routes while the IG office also ensured minute-by-minute monitoring of the rallies.

A large number of security officials comprising police, FC and other forces marched with the processions while officers of the armed forces were also put on red alert to respond to any unexpected event.

Traffic remained low on the road since the morning while children enjoyed their holidays playing cricket in their streets.

After the end of processions, the city’s roads saw a heavy amount of traffic whilst security arrangements were still in place.

Command and Control Room for the monitoring of Close Circuit Cameras was specially established at IG police Balochistan office.

High officials of Balochistan Police, Frontier Cops Balochistan and Levies were also with Minister for Home and Tribal Affairs Balochistan.

The chief minister congratulated security forces personnel on ensuring full security. There was no any untoward situation during Youm-e-Ashura processions owing to strict security measures.