The statue­s and other items may date back 1,500 years, says priest­
By Aftab Khan
Published: September 3, 2019
Tweet Email 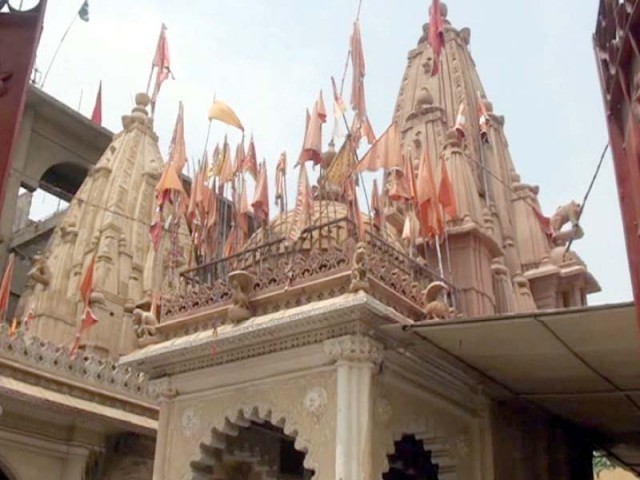 Shri Punj Mukhee Mandir is around 1,500 years old, recalls the priest in charge of the temple. PHOTO: EXPRESS

KARACHI: Excavators have unearthed a treasure trove of precious murtis (idols), while digging at the Shri Punj Mukhee Mandir located in Soldier Bazaar. The ancient statues are apparently carved from yellow stone and bear the Sindour – a traditional vermilion red or orange-red coloured cosmetic powder on their forehead, signifying the customary practice in Hindu culture.

According to the excavators, the idols date as far back as 1,500 years, given their texture and material. The temple administration has invited archaeologists to ascertain the true historical significance of the discovery. The administration has also appealed the government to recognise the temple as national heritage and extend support for its renovation.

According to the temple administration, excavators have found over 15 idols during the course of reconstruction work at the Shri Punj Mukhee Hanuman Mandir, situated in one of the narrow, but densely populated lanes of Solider Bazaar Number 3.

The idols are carved from yellow stones and include mythological Hindu deities of Mahveer Hannuman, Ganesh Mahraj and Nandi Mahveer.

The labourers have also found fire-lighting wells, also known as Howan, near a water drain inside the temple. Meanwhile, a small pot containing what experts claimed were the ashes of a cremated body of a Hindu saint was found in an ancient tunnel. Some personal belongings and stones presumably used by the saint were stored beside the pot.

According to Shree Ram Nath, the priest in charge of the temple, the holy site is around 1,500 years old and has been maintained by his forefathers, generation after generation. “It is surprising even for me to have discovered such a treasure of ancient murtis during the renovation work,” he said.

“The idols are decorated with Sindoor and have been crafted with great skill, using the yellow stones,” he explained, adding that the objects may be as old as 1,500 years. However, an investigation by the provincial government’s antiquities department may better reveal the details, he said, inviting the authorities to take up the mission.

The discovery comes at a time when the Hindu community is celebrating the birth anniversary of Ganesh Jee Maharaj, said Shri Ram Nath, appealing to the prime minister of Pakistan to ensure that the government extended support in taking care of the precious murtis and reserve their spot in the antiquities department so that they become part of the country’s national heritage.

Commenting on the history of the temple, Shri Ram Nath said that until a few years ago, the temple was under illegal occupation, but after the orders of the Supreme Court, the local administration recovered the temple site and removed the encroachments.

Pakistan Hindu Council’s chief patron Dr Ramesh Kumar was personally involved in reclaiming the temple from the land grabbers, he said, adding that the discovery was made during the renovation of the temple premises.

“It appears that the temple administration of the time had buried the deities in the ground of the holy site with great regard,” he explained. “All the murtis are properly covered with Sindoor which is why they remain unaffected till date while the color of Sindour has not faded,” he explained.

The Shri Punj Mukhee Hanuman Mandir finds mention in various historical accounts, including the famous work of Al-Biruni’s Kitabul Hind and others, said Shri Ram. “I appeal our president and the prime minister to ensure that the reconstruction work of the temple goes smoothly and the murtis are regarded as national heritage,” he added. “My ancestors have been serving the country since Independence and chose not to leave and settle in India after partition,” he said.