Trump posted on Twitte­r photo of what appear­ed to be the site of failed Irania­n satell­ite launch­
By Reuters
Published: August 31, 2019
Tweet Email 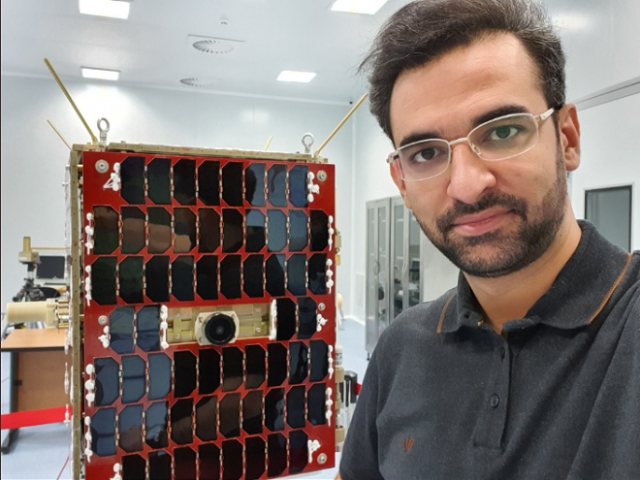 Reporters were shown the Nahid 1 (Venus 1) satellite at a state-run lab on Saturday. SCREENGRAB

DUBAI: Iran showed off an undamaged satellite on Saturday, days after a rocket exploded on its launchpad in the third failed launch of the year, which US President Donald Trump had tweeted about hours earlier.

The United States has warned Iran against rocket launches, fearing the technology used to put satellites into orbit could help it develop the ballistic missile capability needed to launch nuclear warheads, though Tehran denies its activity is a cover for such development.

On Friday, Trump posted on Twitter a photo of what appeared to be the site of a failed Iranian satellite launch, raising questions about whether he had disclosed US surveillance secrets.

The United States of America was not involved in the catastrophic accident during final launch preparations for the Safir SLV Launch at Semnan Launch Site One in Iran. I wish Iran best wishes and good luck in determining what happened at Site One. pic.twitter.com/z0iDj2L0Y3

“But what we do know is that the Nahid satellite is still being prepared at the Iranian Space Research Institute,” he added.

Earlier, in a Twitter post, Jahromi said, “Me & Nahid 1 right now. Good Morning Donald Trump!” along with a picture that purported to show him with the satellite.

The rocket exploded on its launch pad on Thursday, an Iranian official had told Reuters, although Iranian media did not report the failed launch. A US official also said Iran suffered a satellite launch failure.

Trump’s administration has ratcheted up economic pressure on Iran this year with sanctions to try to force it to renegotiate a 2015 pact with world powers limiting its nuclear program. Trump withdrew the United States from the pact in May last year.

Trump has offered to hold talks with Iran but Tehran says it must first get relief from US sanctions.

US, Taliban ‘at threshold’ of Afghan deal