WHO team briefed about anti-polio efforts

WHO team briefed about anti-polio efforts 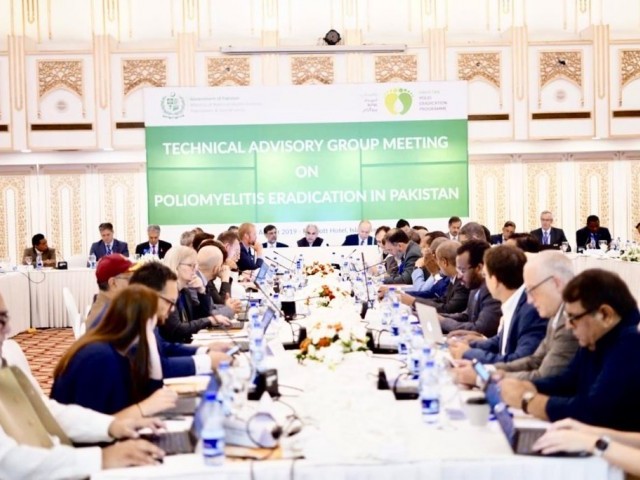 ISLAMABAD: In the wake of a surge in new cases, the government on Thursday assured the WHO’s Technical Advisory Group (TAG) on Polio Eradication that it was committed to making Pakistan a polio-free country.

Speaking at the meeting, Dr Mirza assured TAG members of the government’s utmost commitment to make Pakistan polio-free and address the remaining challenges including community resistance to vaccination, low levels of essential immunisation coverage, sub-optimal accountability and performance management at the district level.

“Despite the challenges identified, we have not lost our resolve to end polio. We remain committed to turning around the situation as soon as possible and secure a polio-free country and a polio-free world,” he added.

Dr Mirza informed TAG members that Prime Minister Imran Khan was leading the polio eradication efforts in the country and steps were being taken to ensure that the gravity of the current situation was communicated and stressed upon at all levels of bureaucracy across the country.

The PM’s aide also highlighted the importance of strengthening synergies between the polio eradication programme and the Expanded Programme on Immunisation as well as other programmes delivering integrated services such as the Ehsaas programme, so that communities vulnerable to polio also received other critical interventions that would improve their lives.

Pakistan’s efforts to eradicate the poliovirus were dealt yet another blow on Sunday as three more cases were confirmed in Khyber-Pakhtunkhwa (K-P) and two in Sindh.

The total number of polio cases in Pakistan this year now stands at 58.

Of these 58 cases, 44 have been reported in K-P alone, most of them from Bannu district.

At a high-level meeting presided over by Prime Minister Imran Khan in Islamabad on August 21, important decisions were taken to intensify the polio immunisation campaign. The meeting was told that to avoid vaccination, parents themselves marked the fingers of their children. On the occasion, an official asked the prime minister to issue an executive order that DCs should not register an FIR in case of refusal by parents because it further increases refusals.

The prime minister also stressed upon the need for a robust Ehsaas Polio Partnership for synergised implementation of the two vital programs.

PM’s Focal Person on Polio Eradication Babar Bin Atta briefed the meeting about the report of International Monitoring Board for the year 2017-18 identifying loopholes in the strategy at that time which led to the recent spike of polio cases in some parts of the country, especially in Bannu.

Babar also stated that the new strategy is based on four new pillars including a shift from push to pull, from disease control to eradication, ownership at the highest level and ensuring complete accountability at the operational level.

He also highlighted various measures being taken for perception management including engagement with social media platforms to counter anti-vaccine propaganda, involving mainstream media for a mass awareness campaign, the establishment of 24/7 call center and publicizing environment or human cases.

The representative of Pakistan Army assured full support to polio teams in their efforts to reach out to the children in far-flung areas of the country.

Representatives of international partners and donors also assured their continued cooperation to the Government of Pakistan in the polio eradication mission.

Founder of Microsoft and philanthropist Bill Gates recently commended PM Imran’s anti-polio drive in a letter and welcomed the strong and growing partnership between the two countries on poverty alleviation initiatives.

Gates appreciated the government’s Ehsaas Programme and its social welfare work for the people. He also expressed his desire to help with the programme.

Regulating vehicular emissions on the cards