Watching ‘Haider’ while Kashmir is silenced

Watching ‘Haider’ while Kashmir is silenced 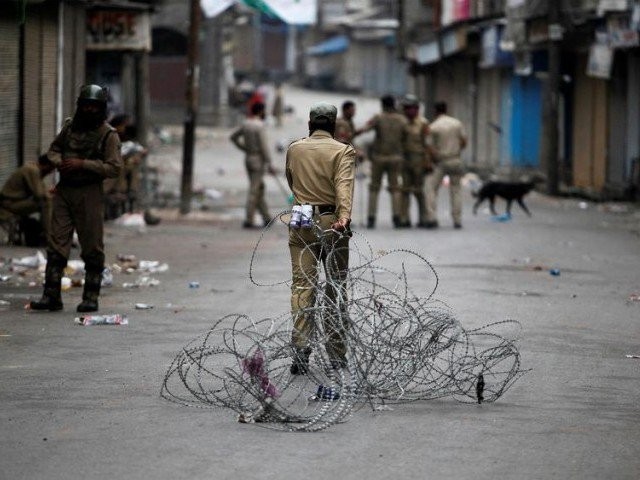 I am borrowing the concept of my article from a book titled Reading Lolita in Tehran: A Memoir in Books by Iranian Professor, Azar Nafisi. The novel narrated her experience as she taught at the University of Tehran after the 1979 Revolution. She refused to submit to wearing the veil and was subsequently expelled from the university. The novel Lolita was written by Vladimir Nabokov in the early 1950s and is a complex tale of a relationship between a middle-aged man and a 12-year old girl. Both the authors not only defied the authorities of their countries politically but also challenged the decadent taboos by producing creative literature.

When I read Reading Lolita in Tehran, I felt like reading Manto’s Kali Shalwar in a madrassa. The creative use of metaphors became a lethal weapon against tyranny — whether it is political or cultural, or imposed by a state or a society. It becomes suffocating when the state is captured by bigots.

India has become such a country since Modi’s BJP took power. Democracy without freedom is worse than dictatorship. In dictatorships people can go to work, visit the doctor if sick, children can go to school, vendors can sell fruits and vegetables on the streets, people can attend funerals, celebrate festivals, go to their places of worship and communicate with each other. Meanwhile, civil liberties have been denied to the people of India-occupied Kashmir for a long time. Arundhati Roy captured it profoundly with “Silence is the Loudest Sound”. No other place in the world likens to even 10% of the occupied Kashmir, as the largest democracy of the world has been turned into a bigot-ocracy.

But it didn’t happen in one day. The nakedly rigged Kashmir Assembly elections of 1989 triggered massive resentment and caused many to demand independence. As the Indian state intensified the use of torture and brutal means to repress the people, the anger against Indian occupation not only spread but also deepened. India trapped itself into this vicious cycle. According to experts, occupied Kashmir has the densest population of military personnel in the world. There were 700,000 military and paramilitary troops present in IOK before August 5, which jumped to 900,000 afterwards. In other words, there is one soldier for every 10 people or two houses. Remember, they are not stationed in cantonments; they are present at every corner of every street. Consider this also: Pakistan’s active military strength is about 650,000.

Simply put, this is worse than the Nazi occupation of Poland. No wonder the conscientious Indian writers, poets, scholars and filmmakers spoke out against this brutal occupation. Roy is perhaps the first writer to break the silence with great courage. She had said once: had Gandhi been alive, he would have asked the Indian government to vacate Kashmir. Her recent book The Ministry of Utmost Happiness sophistically exposes Indian tyranny in Kashmir and how this drives the youth to militancy. Musa’s character in the novel illustrates how this Kashmiri student from the Architecture Schools of Delhi turns into the militant commander, Gulzar. Though details and background differ, almost every Indian film and book produced about IOK since 2000 depicts how brutalities by the Indian troops transform the Kashmiri youth to militancy.

By revoking Article 370, the BJP-RSS government intensified the crackdown in the occupied state right when Eidul Adha and Independence Day were to happen. Anger had engulfed the festive mood in Pakistan too. With the long holidays, my wife and I searched for films set in Kashmir. We found three great movies, of which I liked Tahaan (2008) and Haider (2014) the most. This helped us understand the perspective of the art world on Kashmir.

Tahaan — A Boy with a Grenade is a tale of an eight-year-old boy whose pet donkey, Birbal, is sold to a moneylender because his family needs cash to survive. Tahaan goes to the moneylender to take his donkey back but is told his donkey has already been sold to a Subhan Dar, living across the snow-clad mountains. The boy contacts Dar and tries to negotiate Birbal’s return but fails. He comes across freedom fighters during the journey and they promise to get his donkey back if he carries their stuff (grenades) across the military check posts. The heavy presence of soldiers is found throughout the movie and the freedom fighters don’t even hesitate to use children for their cause. Tahaan tries to blow up a building but changes his mind at the last minute. His whole journey revolves around Birbal. The rugged mountains and freezing cold fail to weaken his unyielding determination. This generates empathy not only towards Tahaan but also to his cause. Santosh Sivan’s film may be seen like this: liberating one’s freedom is as gruelling as getting back Tahaan’s Birbal.

Haider, an adaptation of William Shakespeare’s Hamlet and Basharat Peer’s memoirs, Curfewed Nights, is located in the insurgency affecting IOK during the mid-90s. The Indian military is shown at every corner of the valley. Passengers are stopped and hamulate while searched thoroughly. The people are ordered through loudspeakers in the mosques to come out of their cosy homes for an identity check and are paraded in the freezing cold. Haider also shows how the naked repression of the Indian military politicizes family jealousies and drives the educated youth to militancy.

The central character, Haider is studying at the Aligarh Muslim University. On his return home, he finds his doctor father, Bilaal Mir, has been taken away by the military. Like Tahaan, Haider embarks on a journey to find his father at a time when the state assembly elections are taking place. He discovers his mother is having an affair with his paternal uncle, Khurram, who is a politician and busy in his election campaign. He is a military stooge, who spies and informs on his brother for treating militants and keeping them at his home.

Besides society, political divides exist within households of state officials. Arshia Lone, a journalist and daughter of a local police officer, helps Haider find his father’s whereabouts. She introduces Haider to Roohdar (a freedom fighter) who tells Haider about his father’s disappearance and brutal death.

Later, his mother asks Haider to meet her before crossing the border. During their meeting, she reveals she had told Khurram about the terrorists hiding in their house not knowing he was an informer of the Indian army. Pervez, Arshia’s father, reaches the scene and aims at Haider but instead, Haider kills him.

The movie doesn’t end there. It appears the Kashmiris’ journey will only end when they get their Birbal, freedom and justice back. The current unprecedently long curfew and crackdown may give birth to many Tahaans and Haiders as sacrifices for the right causes do create empathy and solidarity.