Caught in the middle of govt troops battli­ng the Arakan Army two years after being driven out by a milita­ry campai­gn
By Reuters
Published: August 25, 2019
Tweet Email 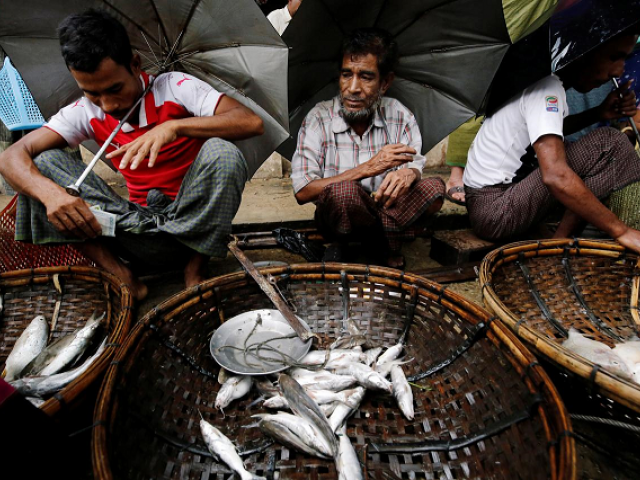 They did not mention the new war being waged at home.

While the majority of Rohingya residents of northwestern Myanmar were driven out by a military campaign that began in August 2017, a scattered community of some 200,000 remained behind in Rakhine state, in villages that were spared with violence. Two years on, many of them are now trapped by a new conflict.

Since late last year, government troops have been battling the Arakan Army, an ethnic armed group that recruits from the mostly Buddhist Rakhine, who make up the majority in the region.

The worsening fighting has left Rohingya caught in the middle and facing threats from both sides, a dozen villagers told Reuters, making returns ever more unlikely.

“We are stuck in the middle of their fight,” said Tin Shwe, a villager from Buthidaung township, where clashes have been intense. “There has been no improvement of our lives over the past two years, only degradation. Only trouble.”

United Nations’ investigators have said the army campaign included mass killings and gang-rapes and was carried out with “genocidal intent”. The military denies almost all the allegations made by refugees during what it said was a legitimate counterterrorism operation.

On Thursday, a third attempt to begin the repatriation of 3,450 Rohingya cleared by the authorities to return to Myanmar failed when the refugees refused to go back.

Min Thein, director of Myanmar’s social welfare ministry, said security measurements were in place for returning refugees. “The Myanmar police force will guard them,” he said.

A military spokesperson did not answer phone calls seeking comment. 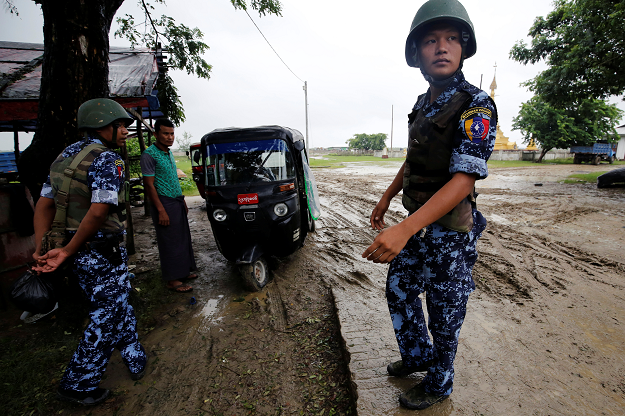 Authorities have shut northern Rakhine off from journalists and most humanitarian agencies, and imposed an internet blackout since late June, citing the need to avert unrest.

The restrictions make information difficult to verify, but Reuters spoke to a dozen Rohingya still in central and northern Rakhine and refugees in Bangladesh with relatives who stayed behind.

Some described landmine blasts and shells falling in Muslim villages, as well as intimidation from combatants on both sides of the conflict.

Two told Reuters they would flee to Bangladesh if they could, but routes out of the country used during the previous exodus have been rendered unsafe by the violence.

More than 1,000 Rohingya have arrived in the camps in Bangladesh since January, according to the United Nations refugee agency, a figure that also includes arrivals from India, which has in recent months been cracking down on what it says are illegal Rohingya immigrants.

Those from Myanmar cited violence linked to fighting between Arakan Army insurgents and the military as well as poor living conditions, spokesperson Louise Donovan said.

Many refugees living in the crowded Bangladesh camps say they want to return home, but under specific conditions, including guarantees of citizenship and security and improvements in the lives of Rohingya still in Myanmar.

Denigrated as illegal immigrants, although many can trace their ancestry in Myanmar back centuries, the Rohingya there are mostly denied citizenship and subject to tight restrictions on movement that keep them confined to camps and villages.

The Arakan Army has been fighting for greater autonomy for Rakhine, a region that was an independent kingdom for centuries.

In its calls for an armed “revolution”, the group draws on deep-seated historical resentment felt by some Rakhines towards the ethnic Bamar majority that dominates the central government.

Rohingya still living in the area say they have been caught in the middle of the conflict.

Government troops battling the insurgents have set up camp in Muslim villages in parts of northern Rakhine, five villagers told Reuters. Soldiers ask Muslim residents to bring them food and firewood, or to show them the roads, villagers said, putting them in danger of retribution from the Arakan Army.

“If they say they will stay, we have to accept it,” said one Rohingya living in Rathedaung township, who like others asked not to be named for safety reasons.

Another in Buthidaung township said soldiers had asked him to guide troops, as he was a proficient Burmese speaker. Some of the Muslim population, particularly from poorer communities, speak only the Rohingya dialect.

Afterwards, the villager said, he got a call from an unknown number, warning that anyone who helped the military would face consequences. He said the speaker told him: “We will kill you. We will burn your village.”

Two Rohingya were shot dead in Rathedaung township’s Sin Khone Taing village in early August after escorting troops, five locals told Reuters. Officials from the village could not be reached for comment.

“We are hostages, stuck between two groups,” said one Muslim who fled the village. “We are not safe. It has been three times already that we have fled from the village since June … The government cannot control this area.”

“We don’t kill our civilians like that,” he said. “As we heard, the Burmese military took them and eliminated like them … There are too many cases like that.”

Many Rohingya in Myanmar have been reliant on international non-profit organisations for medical care and deliveries of food since a previous bout of violence in 2012 that forced many into camps.

Since the start of the Arakan Army conflict, little has been getting through.

In Rathedaung’s Sin Khone Taing village, Rohingya said they last received a delivery of food in May. “People are living off rice porridge,” said one villager.

Kyaw Win, executive director of Burma Human Rights Network, which monitors the Rohingya crisis, said it had received reports of landmines and improvised explosive devices placed on the roads near the exits of Rohingya villages.

In a joint statement last week, 61 NGOs including Save the Children and Oxfam said there had been “no meaningful progress on freedom of movement or human rights” for the Rohingya still in Myanmar, while the recent “upsurge in violence has worsened the already precarious humanitarian situation in central and northern Rakhine state”.

Across the border, in the sprawling Bangladesh camps, refugees keep in touch with their relatives in Myanmar via phone, now that the internet connection has been cut. Nobody is urging them to come home.

“All of the people want to flee as there is no security,” Tin Shwe said. “The government cannot help the few Rohingya left behind. So how could anyone believe they could help hundreds of thousands?”

‘Modi is a terrorist’: Kashmiris protest in front of UN headquarters