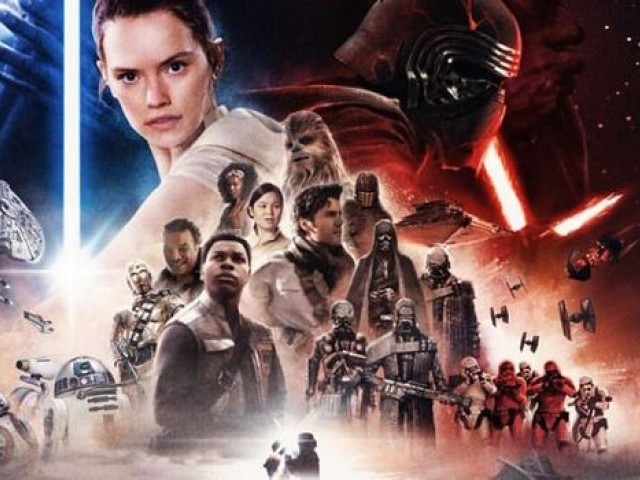 The film is the ninth installment in the space saga started 40 years ago by George Lucas. It debuts in theatres in December.

“It’s kind of hard for me to understand the story is ending, but what an ending!” Anthony Daniels, who plays C-3PO, said onstage surrounded by cast members and droids R2-D2 and BB-8.

The colour of Rey’s lightsaber was a surprise because red is typically used in the galaxy far, far away only by characters on the Dark Side. Ridley offered little explanation.

“It’s the clearest indication that there’s a big old emotional story arc happening,” the actor said in an interview.

Disney is dominating film box offices this year, generating more than $8 billion in ticket sales from Avengers: Endgame, The Lion King and other mega-hits.

Saturday’s presentation looked to the future and featured a parade of Hollywood’s biggest stars.

Dwayne Johnson made his entrance on a makeshift boat to promote Jungle Cruise, an action-adventure movie based on the Disney theme park ride. Johnson said the film was modeled after films such as the Indiana Jones series and Romancing the Stone.

Like those films, Jungle Cruise tells the story “heroic men kicking ass and saving the girl,” Johnson dead-panned, prompting co-star Emily Blunt to come out in protest and introduce clips of her character jumping out a window and needing no assistance.

In addition, Disney revealed scenes from Marvel film Black Widow and a live-action re-telling of Mulan. Angelina Jolie came on stage to talk about Maleficent: Mistress of Evil, and announced Game of Thrones star Kit Harington was joining the cast of superhero flick The Eternals, which also stars Jolie.

Executives at Pixar explained the plot of upcoming film Soul. The movie tells the story of a middle-school music teacher who dreams of being a jazz musician and explores big questions such as “Why am I here?,” they said.

Idina Menzel and Kristen Bell sang alongside Frozen co-stars Josh Gad and Jonathan Groff, who crooned into a stuffed reindeer.

Frozen co-director Chris Buck said the November sequel to the animated fairy tale will start in the past and raise questions such as how Elsa got her powers.

As writers considered that question, “an epic mystery began to unfold, a past that suddenly threatens the future of Arendelle,” he said.

Bell said the sequel had taken four years to make because of the meticulous development.

“There’s not a single word or verb tense in this movie that has not been chosen with great care,” she said in an interview.

‘Breaking Bad’ film is coming to Netflix in October