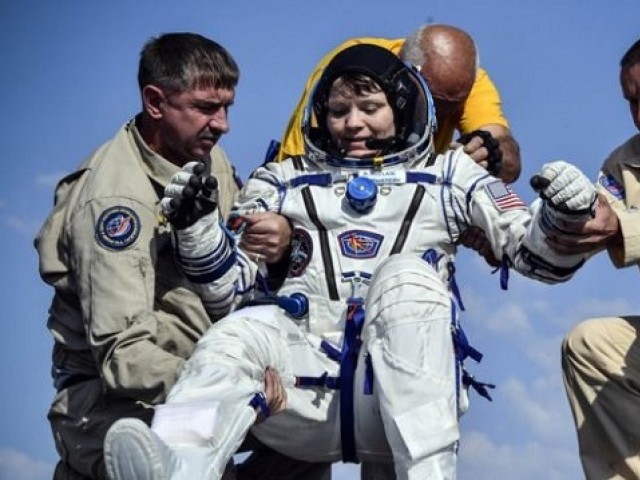 Anne McClain is helped from a space capsule after returning from the ISS in June. PHOTO: REUTERS

The National Aeronautics and Space Administration (NASA) is reportedly to investigate the first crime committed in space, BBC reported.

According to the British news organisation, Anne McClain is accused of accessing the bank account of her estranged spouse from the International Space Station (ISS).

The accused astronaut said that she was only ‘making sure’ that family finances are in order and that there is enough money to support Worden’s son, who the partners raised together before they got separated and pay household bills.

“She strenuously denies that she did anything improper,” said her lawyer, Rusty Hardin, adding that “Ms McClain was totally co-operating”.

According to BBC McClain and Worden got married in 2014. The pair split in 2018 after Worden filed for divorce.  Both have been reached out by the investigating officers from NASA to probe the crime.

McClain, a decorated NASA astronaut, graduated from the West Point Military Academy and has more than 800 combat hours over Iraq as an army pilot. Later in 2013, she was qualified as a test pilot for NASA.

She was about to take part in the first all-female spacewalk however, her role was cancelled at the last minute over what NASA said was a ‘problem with the availability of correct suit sizes’.

How does the law work in space?

US, Russia, Europe, Japan and Canada who own the space station have an agreed respective legal framework that would apply to people and possessions in space.

Europe can extend its laws to any of the European citizens or equipment in space.

Space laws also have a provision for extradition on Earth in case the country wants to prosecute the accused of any misconduct in space.

As legal framework remains untested, NASA officials have said that, “They were not aware of any crimes committed on the space station.”