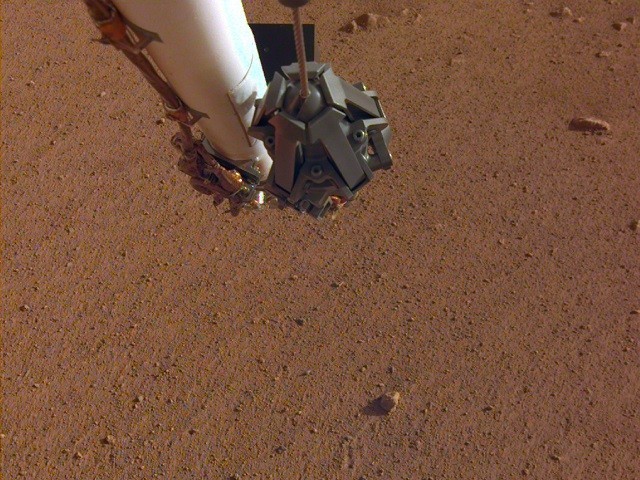 The rock in the center of this image was tossed about 3 feet (1 meter) by NASA's InSight spacecraft as it touched down on Mars on November 26, 2018. PHOTO: NASA

But it’s not just any video, it’s an announcement; NASA’s InSight lander touched and probed a rock. The machine’s thrusters disturbed the golf-ball-sized rock which made it roll for three feet across the Martian landscape. The rock is approximately 2.2 inches in diameter and 1 inch in height.

Sailing among the stars: how photons could revolutionise space flight

Hello “@RollingStones Rock” Who could hang a name on you? Um… us!

When @NASAInsight touched down on the Red Planet, its engines sent a rock rolling across Mars’ surface. We named it for the band. Take a closer look and learn how #MarsRocks get named: https://t.co/xY0TfoksJP pic.twitter.com/BZlABAMaZJ

In images taken the next day by the InSight, there were several divots in the orange-red soil that were seen trailing the Rolling Stones Rock.

Here’s a closer look at the newly named “@RollingStones Rock.” Read more about how this and other #MarsRocks get their names. https://t.co/uzs95RahaP pic.twitter.com/Xm0Rpt9gTg

“I’ve seen a lot of Mars rocks over my career. This one probably won’t be in a lot of scientific papers, but it’s definitely one of the coolest,” said JPL geologist Matt Golombek in a press release from the agency.

The exploration of space in 10 key dates

The most ambitious crossover announcement in space?@NASAInSight just named “@RollingStones Rock” on Mars in honor of the band. Watch @RobertDowneyJr announce the @NASA news live on stage at the Rose Bowl ahead of tonight’s concert. https://t.co/868Gbervw1 #MarsRocks pic.twitter.com/xETMzS0H9y

The name Rolling Stone remains informal as the scientists working with NASA’s Mars rovers give such nicknames, the official name of places and objects throughout the solar system are designated only by the International Astronomical Union.