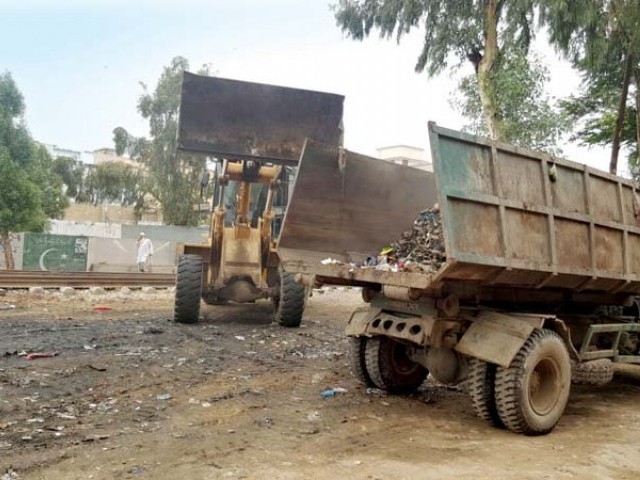 The minister along with Karachi Mayor Wasim Akhtar officially launched the drive on Sunday at the Karachi Port Trust office but failed to come up with a solid mechanism till Tuesday. PHOTO: EXPRESS

KARACHI: Sindh Minister for Information and Labour Saeed Ghani has said that it is extremely regrettable that all the stakeholders of Karachi are unable to join hands to resolve the problems being faced by its citizens.

Ghani said that the most trumpeted ‘Clean Karachi Drive’ – launched by the Pakistan Tehreek-e-Insaf – continued on Twitter only and Karachi Mayor Waseem Akhtar seemed to have joined the elusive drive. He was speaking to the media on Monday, where he said that even when the Sindh government was spending billions of rupees on Karachi, the mayor was inciting people to stop paying their taxes.

The mayor never asked the federal government to release the funds promised for Karachi, he added. He added that Akhtar didn’t even bother to ask Federal Minister for Maritime Affairs Ali Zaidi who had advised him to throw the garbage collected from storm water drains in open spaces or grounds. He lamented that the practice of dumping the garbage into open spaces had multiplied the miseries of the people of Karachi.

The minister clarified that the Sindh Solid Waste Management Board was formed after the district municipal corporations had failed to dispose of the solid waste effectively. He added that while the SSWMB was functioning quite effectively, no one ever appreciated its efforts.

Addressing Zaidi, the information minister said that it would be better to stop the drive instead of throwing litter everywhere.

Ghani said that it was incompetence on the part of the federal government that it could not anticipate the malice of India that it would release water into our rivers without prior warning. The country was facing a flood-like situation owing to the inefficiency of the PTI government, he added.

Later, while addressing a prize distribution ceremony at the National Institute of Labour Administration and Training, Ghani said that social security was one of the most important initiatives undertaken by the provincial government in the last two years. The minister said that it was the vision of Pakistan Peoples Party Chairman Bilawal Bhutto Zardari that the social security of every labourer should be ensured. The prosperity of our labor force could not be ensured unless the industrial sector was strengthened, he said.