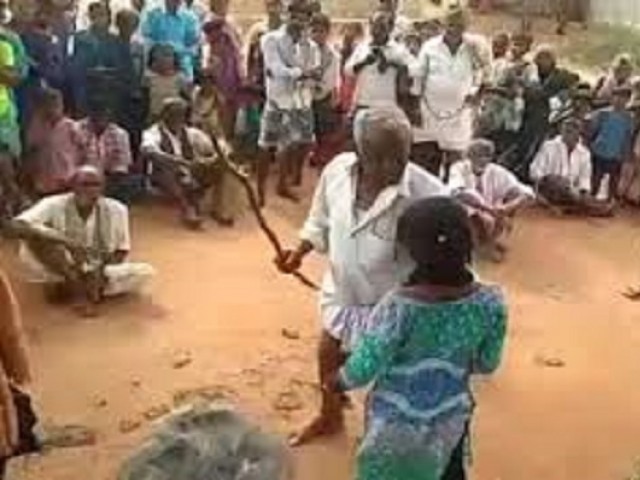 A video went viral on Saturday in which an Indian girl is being beaten up by a village elder in the presence of several others in Andhra Pradesh’s Anantpur district.

According to NDTV, the girl, who is believed to be a minor, had secretly running off to marry her 20-year-old cousin.

The couple was brought presented before the village elders and cautioned against having a relationship.

In the video, the 20-year-old is seated on the ground, with downcast eyes, and the so called village elder is questioning the frail girl before him.

An answer she gives upsets him and he starts assaulting her, multiple times, repeatedly, first with his bare hands and subsequently with a stick.

Anantpur district police chief B Yesubabu said that no one was coming forward to lodge a complaint against the village elder, not even the parents. “They say the elder intervened on their behalf and so they are not willing to complain.”

The police has now sent a woman constable to check if the girl will file a complaint. If she mentions that she had a physical relationship with the boy, he could be booked under Protection of Children from Sexual Offences or POCSO.

If no formal complaint is lodged, the police will file a case under Prevention of SC/ST atrocities Act, police said.

Indian child rights activist Achyutha Rao of Balala Hakkula Sangham says he is alerting the National Commission for Protection of Child Rights and has demanded that a case of attempt to murder and cruelty against children of JJ Act should be booked.

#AndhraPradesh : In a shocking incident a minor couple was allegedly beaten in #Anantapur district. Based on the video evidence a  suo moto case has been booked against the man for mercilessly beating the girl and the boy pic.twitter.com/OpXwSSvkdE

Iran tanker in limbo off Gibraltar as US issues warrant