Fishermen reluctant to install tracking system for being too costly

Fishermen reluctant to install tracking system for being too costly

MSA DG says that the owners paint the MSA as the bad guy but these measur­es needed for their safety­
By Aftab Khan
Published: August 17, 2019
Tweet Email 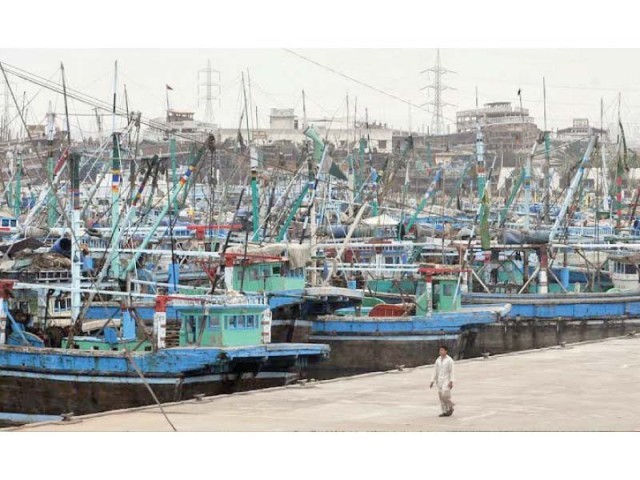 Launches and boats stand parked at the fishing harbour awaiting their next trip to the deep sea. PHOTO: EXPRESS

KARACHI: The installation of a Vessel Monitoring System (VMS) would make it possible to locate any launch stranded at sea in any emergency situation. However, according to Maritime Security Agency (MSA) Director General Rear Admiral Zakaur Rehman, the owners of fishing launches are unwilling to install the system in their vessels.

According to Rear Admiral Rehman, through the VMS system, only a button would be pressed and the VMS headquarters would be able to monitor the vessel with its location easily. Although the law says that a vessel longer than 15 metres cannot venture into the deep sea without this system, the owners of the launches have not been adhering to the law, said Rear Admiral Rehman. However, the matter is not as simple.

Speaking to The Express Tribune, Rear Admiral Rehman said that the owners of the launches which are used in fishing expeditions manipulate the common fishermen and push them forward to protest over the enforcement of laws. The fishermen are given the impression that the MSA is subjugating them, he said, adding that the fishermen cannot afford the vessels which cost around Rs20 million each. The MSA does not expect them to be able to afford the Rs200,000 cost of the VMS system and it is actually the owners who are unwilling to install the system. Rear Admiral Rehman further said that the reason behind this is that the system would also alert the authorities of the illegal fishing activities these launches are often used for.

Claiming that the VMS would only ensure the safety and protection of the fishermen, the MSA DG gave the example of a launch named Al Saddam which was caught in an emergency situation in the sea near Karachi due to bad weather. Around 22 people were on the vessel which drowned in the sea. Of the 22, ten fishermen were rescued but 12 remain missing, said Rear Admiral Rehman. A helicopter, an aircraft and a ship of the MSA were sent for the rescue mission along with a helicopter of the Pakistan Air Force (PAF) and a ship of the Pakistan Navy. These were five naval and air force ships and helicopters which were used in the rescue mission and that required a lot of fuel, he said, adding that this could have been averted if the location of the drowned vessel had been traced. The rescue operation could have been carried out more effectively, efficiently and at lower cost had the vessel been equipped with the VMS system, he claimed.

Besides, he added, the VMS system would allow the monitoring of any vessels crossing the sea borders and entering Indian, Omani or Iranian territories leading to arrests of Pakistani fishermen.

It is a difficult task to find a stranded vessel or a vessel stuck in an emergency situation when there are hundreds of other launches in the sea at a time, said Rear Admiral Rehman. The launches could easily be located if the system is installed, he adds. According to him, the MSA is very lenient with the fishermen but there are some issues that cannot be compromised on. “The launch owners may not care about the fishermen but we are trying to ensure that no vessel sets off to the sea without proper safety gear,” he said adding that the GPS facility should be available on every boat and fire fighting equipment must also be installed in the boats.

Meanwhile, speaking to The Express Tribune, Pakistan Fisherfolk Forum President Muhammad Ali Shah said that the fishermen are willing to install the VMS in the larger launches but it is the smaller boats that present a problem. The fishermen who own those boats cannot afford to install the costly system in their vessels, he added. Referring to the law that the MSA DG had cited – of vessels longer than 15 metres not permitted to venture into the deep sea without the system – Shah said that according to his knowledge, there was no such law stated in the policy.

Rear Admiral Rehman said that fishermen often complain of arrests by the agencies deployed at sea but the primary reason behind those arrests is the non-compliance with safety measures and the use of banned fishing nets. The use of illegal nets destroys fish eggs and prevents future breeding as mature fish, fry and baby fish and fish eggs are all captured through the illegal nets, he said.

The nets are sent from illegal jetties through boats which distribute these nets to the bigger launches out at sea, explains Rear Admiral Rehman. This is difficult to prevent as the MSA does not have any authority on land and cannot prevent the boats from leaving the shore with these nets. The capture of fish eggs and baby fish is a loss for the whole nation as well as for future generations, he said. “It is the primary responsibility of MSA to enforce national and international laws,” he added.

The maritime sector plays a significant role in the national economy all over the world and the secret behind their progress is adherence to laws, he remarked. “The contribution of the maritime sector in our economy is limited and we cannot use it properly despite the sector having immense potential in this regard,” added the MSA DG. “The deep sea fishing policy was formulated in consultation with all stakeholders but when time to enforce the policy came, resistance came from all sides and the policy was suspended after only two months,” he said. According to him, if the illegal fishing activities continue in the same way, it would be harmful for our marine ecosystem. Many species of fish have already become extinct in the Pakistani sea, he claimed.