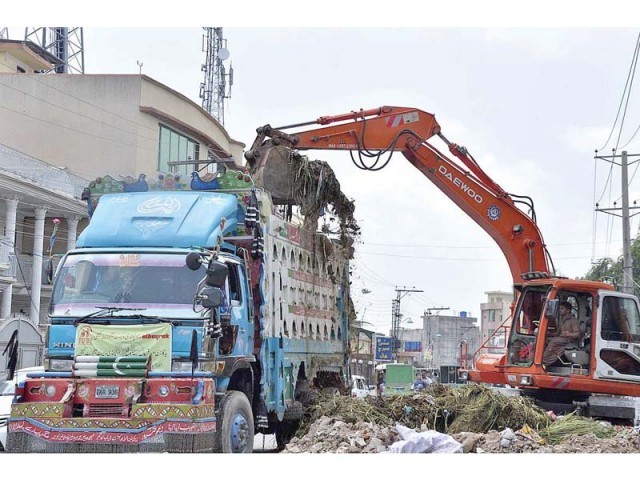 Lifting and disposing offal of sacrificed animals is a matter of great responsibility. Any laxity can lead to spread of diseases due to rotting guts, entrails, heads and hooves lying around in localities.

Punjab Education Minister Raja Rashid Hafeez along with both officials, visited the control room established in RWMC where he was briefed about the cleanliness plan. The minister also visited camps setup by RWMC in different areas and distributed waste bags amongst the citizens.

Later that night, Tarar visited areas of Potohar Town including Al-Noor Colony, Shakaryal, Gangal, Khanna Pull and other localities to monitor cleanliness operation. He instructed to move transfer station at Shakaryal road to a less populated area and to sprinkle limestone on current place after washing it. He also visited other transfer stations and directed related officials to get rid of sacrificial animals’ entrails before next day.

More than 3,000 sanitation workers and other employees of RWMC remained in field and in office to play their part in cleanliness operation which commenced on Sunday while control room also performed its duties actively and immediately responded to all public complaints.

RWMC had also launched a mobile application through which the citizens could retrieve updates of cleanliness condition in their respective areas while dump station is also working round the clock.

Some 364 vehicles, 144 mini dampers and 250 handcarts are being used in operation while teams remained present in all 13 grounds allocated for grand slaughter.

The temporary established transfer centers across the city would wind-up and sprinkled with limestone while they would be washed with phenyl to stop spread of bacteria and germs today (Wednesday).

Over 100 vehicles would remain present in different sectors of the city for early disposal of offal and other wastes of sacrificial animals on scientific basis and for that purpose more than 70 deep ditches have been dug out at 37 different places, Director Sanitation Sardar Khan Zimri said.

On the directions of Mayor Islamabad Sheikh Anser Aziz, all formations concerned including Emergency and Disasters Management, 1122 (Ambulance Service) and Capital Hospital were performing joint coordinated efforts to serve the capital dwellers during Eid holidays, he added.

Besides, two emergency cells have also been established, one at Transport Section, CDA Fire Headquarters while the other one at Sanitation Directorate, Sector G-6-1/4 which were functional round the clock.

He sought public cooperation for making this operation successful, urging them to not throw offal and other waste material of sacrificial animals in the green areas rather keep it in front of their houses so that sanitation workers could easily pick and dispose of the waste in proper manner.