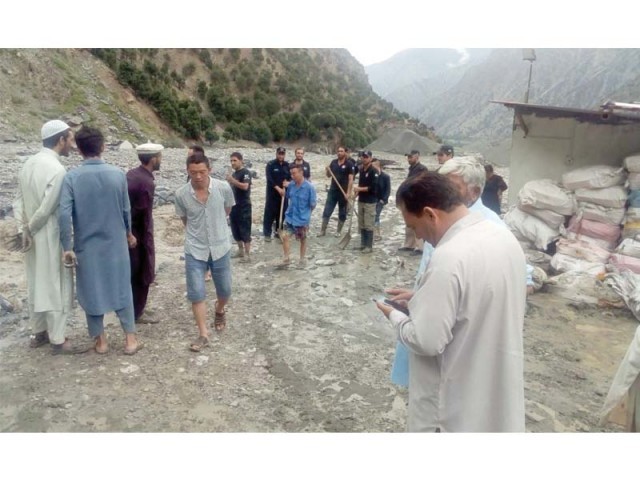 PESHAWAR: At least six people died, while over two dozen were seriously injured when torrential rains and flash floods lashed out the villages in Shangla and Chitral, while there is fear of more rains and flood in the upper areas of the province, southern districts in North Waziristan and Khyber and lower Kurram.

The Provincial Disaster Management Authority (PDMA) has warned the relevant authorities of the districts to take precaution measures to avoid any untoward incident.

While widespread rains in the Malakand division last night, inundated several areas which also caused several houses to cave in Shangla, Upper, Lower Chitral and the Chinese CPEC camp site was also damaged while many sections of the Karakoram Highway have been blocked due to the heavy landsliding.

The PDMA has shifted the Chinese workers and engineers who have been engaged in the CEPC projects to a undisclosed location in the Gilgit and lower area, while many families have also been shifted to safe areas in the districts Chitral and Shangla after waters entered their houses while rescue activities have also been beefed up.

In Chitral the camp of the Chinese engineers who had been working on the Lowari tunnel, was also swept away and they were shifted to safer places in the upper Dir, while due to the security situation their location has been remained secret.

The PDMA has started rescue and reconstruction work on the camp site of the Chinese engineers, while heavy machinery using to restored the residential facilities in the camp.

The details report of the PDMA has showed that two houses totally collapsed due to the severe flash flood in the Buner and Shangla districts leaving six people dead, while many others were injured.

The K-P Chief Minister Mahmood Khan has expressed concern over the loss of human lives and directed the PDMA and district authorities to take appropriate measures to provide swift measures to the affected people and also help the rest of the stranded people in the areas.

The PDMA report also indicated that rivers in K-P flow are flowing normally while Kalpani Nullah in Mardan is flowing with 46,823 cusecs in high flood situation.

Meanwhile the torrential rain and upper areas of Malakand, while scattered rain in few lower are also expected.