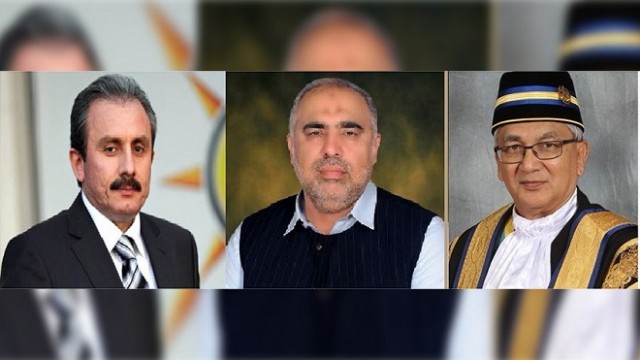 ISLAMABAD: Turkish National Assembly Speaker Mustafa Sentop assured his Pakistani counterpart to pass a resolution in the Turkish parliament on the issue of Kashmir.

The assurance came in a telephone call made by National Assembly Speaker Asad Qaiser to him as part of wider outreach efforts in the wake of the situation in occupied Kashmir.

Qaiser apprised Sentop on the deteriorating situation in the occupied territory. He also expressed gratitude, on behalf of the people of Pakistan, to the Turkish president on his condemnation of Indian steps in occupied Kashmir.

He informed his Turkish counterpart that the Indian government, led by Narendra Modi, had plans to turn Kashmir into a colony of India by revoking the special status of the area.

The speaker also spoke to his Malaysia counterpart, Mohammad Arif Yusof, on the phone and apprised him of the deteriorating situation in occupied Kashmir in the wake of the revocation of Articles 35A and 370 by the Indian government.

“This cruel Indian step is a new assault on the rights of the besieged people of Kashmir,” he told the Malaysian speaker.

The articles had been included by the founders of India in the constitution as part of their commitment to the UNSC resolutions on the peaceful resolution of the Kashmir dispute.

Yusof said that the Malaysian government was carefully monitoring the situation while calling for the dispute to be resolved according to the aspirations of the Kashmiri people.