It was Hamilt­on's record sevent­h win in Hungar­y, his eighth this year and the 81st of his career­
By AFP
Published: August 5, 2019
Tweet Email 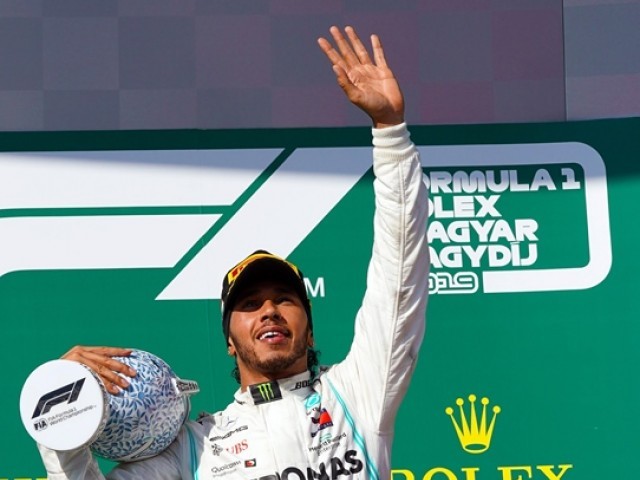 HUNGARORING: Lewis Hamilton regained the momentum in the world championship with a memorable strategic victory on Sunday when he overcame young rival Max Verstappen with three laps to go in a tense Hungarian Grand Prix.

The 34-year-old defending five-time world champion started third on the grid in his Mercedes and, after stalking the 21-year-old Dutch tyro for most of a fascinating tactical contest swept into the lead on lap 67 of a stirring 70-lap contest.

It was Hamilton’s record seventh win in Hungary, his eighth this year and the 81st of his career, wrecking Red Bull’s hopes of turning Verstappen’s maiden pole position into victory, and increased his lead in the title race to 62 points before the sport’s European summer break.

Verstappen, who led most of the race before his tyres faded, had no time to match Hamilton’s tactics when the Briton made his second stop, came home 17.796 seconds behind in second and clocked a record race fastest lap for the Hungaroring after a late pit-stop.

Four-time champion Sebastian Vettel was third for Ferrari ahead of team-mate Charles Leclerc, Carlos Sainz of McLaren and Pierre Gasly in the second Red Bull.

Kimi Raikkonen was seventh for Alfa Romeo ahead of Hamilton’s Mercedes team-mate Valtteri Bottas who had been forced into an early pit-stop after a first lap incident.

“What a drive, what a strategy,” said Hamilton’s race engineer Peter Bonnington. “Only you could make that work today.”

Mercedes matched Red Bull’s strategy until gambling with a late additional pit-stop that left Hamilton with 20 laps to make up a 20-second deficit on fresh tyres — a move that worked as Verstappen’s tyres faded away.

“They rolled the dice and it worked for them, unfortunately,” Red Bull team boss Christian Horner told Verstappen. “But you drove your heart out.”

A week after his forlorn error-riddled exit from last weekend’s tumultuous German Grand Prix, won by Verstappen, Hamilton had bounced back in style.

“It feels like a new win for us,” he said. “I didn’t know if I could do it and I am sorry I doubted our strategy — it was brilliant.”

A crestfallen Verstappen admitted: “We just weren’t fast enough. I tried everything I could to keep the tyres alive, but I couldn’t.”

Hamilton had earned a 1,000-euro fine for Mercedes for speeding in the pit lane before the start on a hotter-than-expected afternoon with an air temperature of 26 degrees Celsius.

Bottas, from second, had a poor start, losing position to Hamilton who squeezed through at Turn Three.

The luckless Finn was then clipped by Leclerc’s Ferrari and damaged his front wing. This cost him critical down-force as he tumbled through the field.

This forced him to pit after six laps for a new nose and a set of hard-compound tyres. He re-joined in last place, 49 seconds adrift.

The leading duo pulled away inexorably. By lap 11, Leclerc was adrift by nearly 11 seconds and it was clear that the inter-generational battle, between the old master and his potential successor, the Dutch young pretender, was the main, if not only, event.

Separated by two seconds, it seemed they were merely jabbing, or sparring and waiting for their moment of close engagement to arrive. Behind them, Bottas, whose future is in doubt, climbed to 14th while the Toro Rossos entertained with a wheel-to-wheel tussle.

Hamilton trimmed the lead to 1.3 seconds and then dummied to pit on lap 22, but stayed out to avoid resuming amid the Ferraris.

“I’m losing a lot of grip,” Verstappen complained in a message he repeated rather testily.

Hamilton pitted after 31 laps, stopped for four seconds and resumed second, 5.5 seconds behind.

By lap 33, he had reduced it to 2.8. Vettel, in third, was 20 seconds adrift as the Englishman smashed the gap and attacked with venom. Verstappen and Red Bull appeared caught napping.

With 12 laps to go, the gap was 14 seconds as Hamilton set successive race lap records, slashing the Dutchman’s lead on his way to victory.

Nadal ‘ready to play’ despite absences of Djokovic, Federer