Under the Articl­e IoK was recogn­ized as an indepe­ndent state
By News Desk
Published: August 5, 2019
Tweet Email 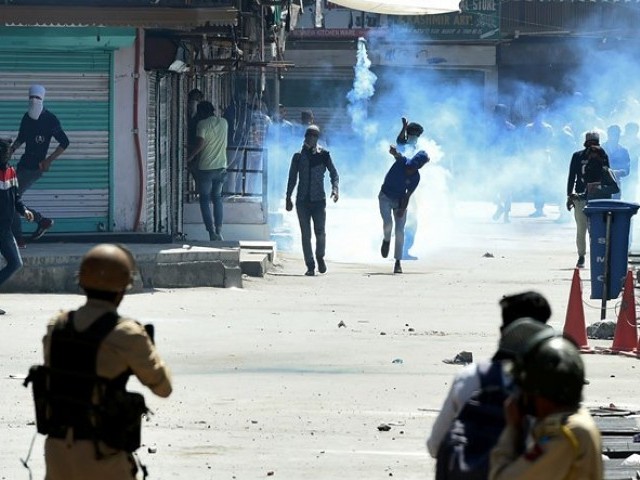 As Prime Minister Narendra Modi’s government abolishes Article 370 of India’s constitution, The Express Tribune takes a look at the article’s provisions and the impact of its abrogation.

Under Article 370 of the Indian Constitution, ‘Temporary provisions with respect to the State of Jammu and Kashmir’, IoK was afforded autonomy as India allowed the state to have its own constitution, a separate flag and independence over all matters except defence, foreign affairs and communications.

With Article 370 revoked, the Indian constitution will come into full force in IoK and the state government loses its power to decide which provisions should be applied in the occupied territory.

According to CNN-News18, Article 370 specifies that except for Defence, Foreign Affairs, Communications and ancillary matters (matters specified in the Instrument of Accession), the Indian Parliament needs the state government’s concurrence for applying all other laws.

Thus, the state’s residents lived under a separate set of laws, including those related to citizenship, ownership of property, and fundamental rights, as compared to other Indians.

Similar protections for unique status exist in tribal areas of India, including those in Himachal Pradesh, Arunachal Pradesh, Andaman and Nicobar Islands and Nagaland.

However, it is only in the case of Jammu and Kashmir that the accession of the state to India is still a matter of dispute between India and Pakistan, still on the agenda of the UN Security Council and where the Government of India vide 1974 Indira-Sheikh accord committed itself to keeping the relationship between the Union and Jammu and Kashmir within the ambit of this Article.

(1) Notwithstanding anything in this Constitution,-

(a) the provisions of article 238 shall not apply in relation to the State of Jammu and Kashmir;

(i) those matters in the Union List and the Concurrent List which, in consultation with the Government of the State, are declared by the President to correspond to matters specified in the Instrument of Accession governing the accession of the State to the Dominion of India as the matters with respect to which the Dominion Legislature may make laws for that State; and

(ii) such other matters in the said Lists as, with the concurrence of the Government of the State, the President may by order specify.

Article 35A of the Indian Constitution allows the legislature to define the state’s “permanent residents” and what distinguishes them. It applies to all of IoK and Ladakh.

All identified residents are issued a permanent resident certificate, which entitles them to special benefits related to employment, scholarships and other privileges. But the biggest advantage for permanent residents is that only they have the right to own and buy property in the state.

(a) Parliament shall have, and the Legislature of a State shall not have, power to make laws-

This article holds particular significance as it protects IoK’s distinct demography and ensures that it remains India’s only Muslim-majority state.

Observers believe the move to scrap Article 35A is driven by the desire of Hindu nationalist groups such as Modi’s Bharatiya Janata Party (BJP) to end Muslim majority in IoK.

The article’s removal opens the door for mass Hindu migration and settlement in IoK, akin to Israel’s occupation of Palestinian territory.