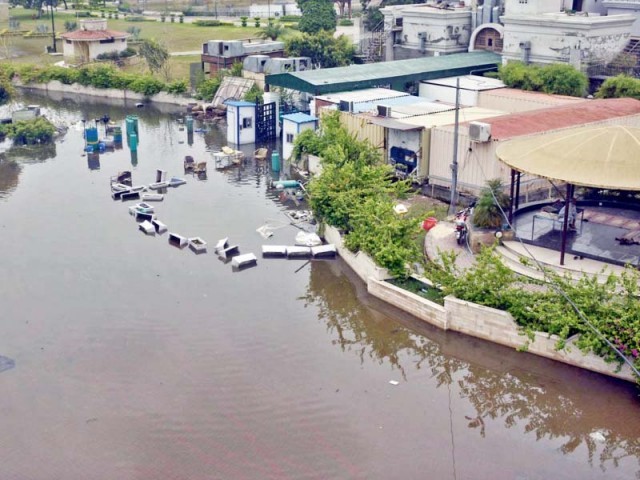 Rainwater accumulates in the family area of the Greater Iqbal Park after heavy rains. PHOTO: ONLINE

LAHORE: The after effects of Thursday’s rain continued to be felt in the city as three minor siblings were killed in a roof collapse, while standing water left several low-lying areas inundated.

The neighbours also informed rescue teams, which reached the spot to remove the debris. The victims were evacuated and taken to a nearby hospital. Police said three minor siblings, identified as Khurram, 6, Haroon, 8 and Sania, 10, died in the incident. Meanwhile, their mother Razia Bibi and her other son, Roheel, 9, suffered injuries. Doctors said Razia was in critical condition as she had suffered severe injuries.

Roheel told the media that he was watching television at night when water started to leak from the roof.  He added that after a few moments, the roof fell on them. Ten members of the family were present in the house at the time of the incident.

A relative of the victims said that they were living in a house which was in dilapidated condition. He said that the head of the family works as a labourer and could not afford higher rents.

Water accumulated on roads and various localities could not be drained, especially from low lying areas such as parks. According to the Met Department, monsoon rains are expected from July 27 to July 31.

WASA also issued a red alert and officials from other departments have been deployed to drain standing water from the city. Monsoon rains continued all over the country, including Lahore.

Although an entire day has passed, the water still remains standing. Locals claimed that the Parks and Horticulture Authority and WASA had taken no action to drain out water from these areas and parks.

He said all highways have been cleared, while there is the need for a quick check on small roads. “Action must be taken on information provided by citizens.”