As PM Imran declar­ed during the visit to the erstwh­ile benefa­ctor that he was not there to seek aid
By Dr Pervez Tahir
Published: July 26, 2019
Tweet Email 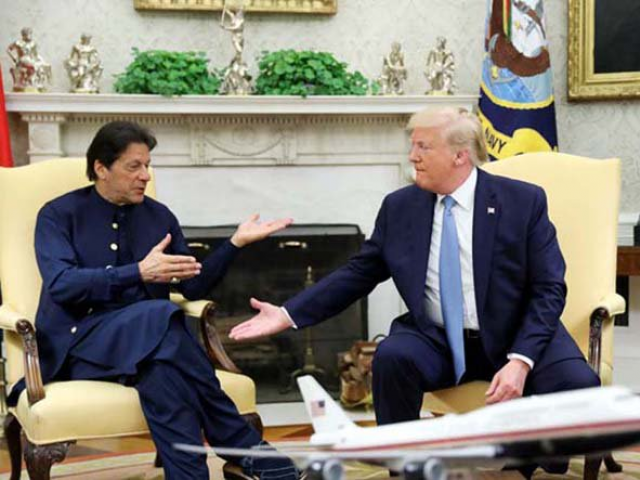 For a country borrowing a staggering $16 billion to meet external liabilities, the declaration by its Prime Minister during the visit to the erstwhile benefactor that he was not there to seek aid, should surprise many. “Aid, trade or what?” used to be a great debate during the heydays of development economics. While other developing economies utilised the initial aid, but deliberated simultaneously on alternatives such as export-led growth and foreign investment, Pakistan acquired its proverbial dependence on aid, especially the US grant assistance that produced high growth in the 1960s, 1980s and 2000s. In the other decades, its policymakers spent time on reviving the aid relationship. The result is that the share of exports in the GDP today is about the same as in 1969. The only “development” is that imports are more than twice the size of exports and foreign investment less than one per cent of the GDP.

It seems that the message this time is to go for sustainable alternatives. In his typical bombastic style, Trump talked about trade expansion of 10 or 20 times or more. Interestingly, despite all the ups and downs, the US continues to be Pakistan’s largest export destination — $4 billion last year. Not only that, imports are about half of the exports, leaving a trade surplus. The state of investment is dismal, though. The inward direct investment position at the end of 2017 stood at $1.9 billion, with the net inflow in FY 2019 at a bare $88.6 million. In other words, Pakistan was never the destination for investors from a country that was a major source of development in the leading countries of today, including China.

The reason is the “what” part of the matrix. This is not a black box. It relates to the creation of a climate of ease of doing business within and, more importantly, a pragmatic foreign policy. Pakistan may be lower down on the ease of doing business index, but investment from the West and its leader, the United States, is stalled more by the perceptions of a rogue state not worthy of trust. Of course, these perceptions are a fallout of the transactional nature of our aid relationship. Our story is that we are left in the lurch once the transaction is over. Their story is that we do not deliver and we cheat as well. In economic jargon, there is incompatibility of objectives. On our side, the transactional relationship was signed on by short-sighted governments seeking legitimacy. The situation now is that the lack of trust forces the IMF to front-load harsh economic measures. The spectre of the FATF black list is haunting us. The deficit in the agreed action plan is a lot more damaging than the fiscal deficit or the current account deficit. Friends rushing in money can plug in the latter, but the former is the key to normal and long-term inflows. This requires diplomacy and building of trust.

So our story this time is different. It is our objective to seek durable peace in the region, beginning with Afghanistan. If Trump wants a trophy for his re-election, that is his problem. As long as we do not seek immediate money in return, we are on course. The proof is that we are not even asking for what is our due, the Coalition Support Fund (CSF). We now believe that countries and regions rise and fall together. Once peace breaks out, trade and investment will follow. In our special case, a demonstration of civil-military solidarity was necessary. Hopefully, the missing page of the government-opposition entente will be found soon to build an economy of trust.