PM Imran creates history at Capital One Arena in DC

PM Imran creates history at Capital One Arena in DC

Event was organi­sed by the Pakist­ani commun­ity in USA
By Shamim Bano
Published: July 22, 2019
Tweet Email 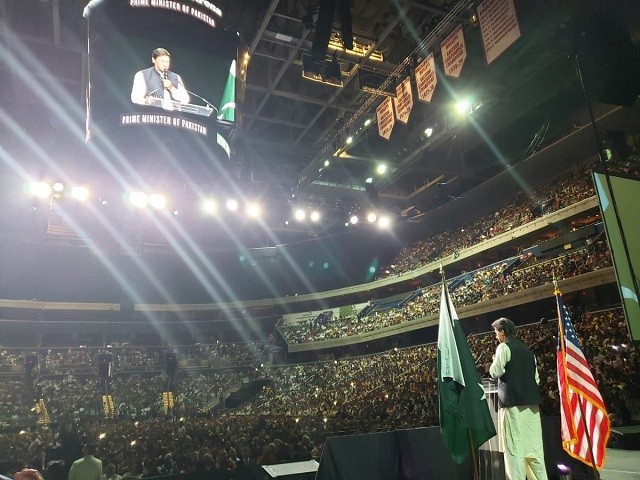 CHICAGO: Imran Khan – who is currently touring the United States – created history on Sunday by becoming the first Pakistani prime minister to address a massive crowd of the Pakistani community in Washington DC.

Imran spoke at Capital One Arena, which was packed to capacity with a highly charged crowd.

According to sources, PM Imran had initially refused to address the crowd of the Pakistani community saying that the cash-strapped government could not afford the event.

However, the prime minister gave in after he was given an assurance that the community would arrange funds for the event.

Though the event was entirely organised by the Pakistani community, the government had set up a committee to synchronise efforts for its success.

The idea of addressing the Pakistani community had been floated by Syed Javed Anwer, a Pakistani-American tycoon from Texas who is also said to have played a role in the premier’s visit.

Anwer was reportedly a partner of George W. Bush Jr. in the petroleum industry.

Nukhbat Malik, of Voice of America, says that Anwer had asked the Trump administration to reach out to PM Imran in order to thaw the frosty relationship with Pakistan.

The community has immensely appreciated Anwer’s efforts for organising the event. Anwer, in his efforts was aided by other community leaders including Sajjad Burki, Atif Khan, Abdullah Riar and Saeed Sheikh.

According to Saeed Sheikh, an amount of $500,000 was spent on organising the event which included rent, lightening, sound systems, LED screen system and insurance and security costs.