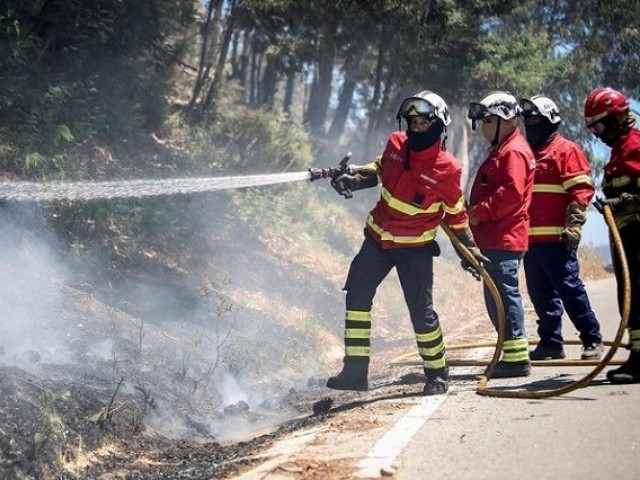 The firefighters were deployed to tackle three fires in the mountainous and heavily forested Castelo Branco region, 200 kilometres north of Lisbon. PHOTO: AFP

PORTUGAL: More than a thousand firefighters battled Sunday to control wildfires in central Portugal that have forced village evacuations, in a region where dozens were killed in huge blazes in 2017.

The firefighters were deployed to tackle three fires in the mountainous and heavily forested Castelo Branco region, 200 kilometres north of Lisbon, according to the website of the Civil Protection.

Around 20 helicopters and aircrafts were involved in efforts to douse the flames before nightfall made further flights impossible.

A civilian who suffered serious injuries and was evacuated by helicopter to Lisbon, Luis Belo Costa, the commander of the civil protection for the region said.

Four firefighters were also reported injured, and a further three were hurt after their fire engine collided with another.

The army said in a statement it was dispatching twenty soldiers and machinery to open routes “to facilitate access” for the firefighters.

Several national highways have been closed and a number of villages in the region have been evacuated as a precaution, the civil protection said.

Belo Costa said he hoped to have the three fires under control by early Sunday morning.

In a message, President Marcelo Rebelo de Sousa expressed his “solidarity with the hundreds fighting the scourge of the fires.”

Portugal is still traumatised by the deaths of dozens of people in huge blazes in 2017, with authorities taking extra precautions.

Fanned by strong winds, the fires had been spreading in three directions since Saturday afternoon.

Six regions of central and southern Portugal have been placed on maximum fire alert.

Costa Rica on alert after 19 die from tainted alcohol