A video that went viral featur­es an eight-year-old girl drivin­g a water tanker­
By Our Correspondent
Published: July 14, 2019
Tweet Email 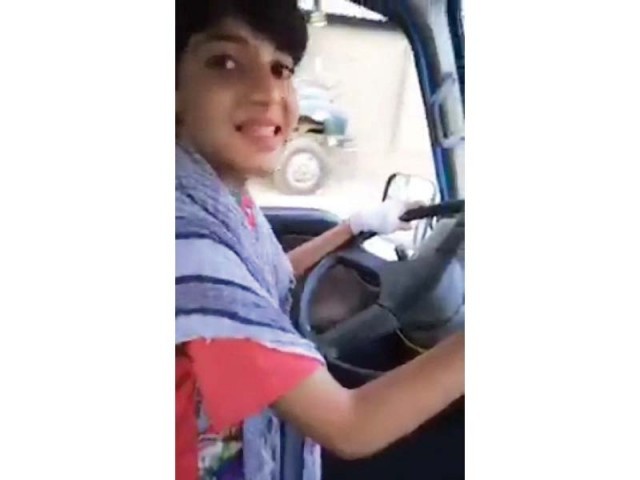 KARACHI: The water tanker was expertly manoeuvred on the roads of Karachi. It seemed to be moving smoothly, and yet, the danger it posed to the life of its driver as well as to that of others on the road couldn’t be ignored. The heavy vehicle was being driven by a minor.

A video that went viral on Saturday featured Bushra alias Khushi, an eight-year-old girl and a resident of Sher Shah, driving a water tanker. However, while the oddity of the happening awed many, whose wonderment blinded them to all that was wrong with the act, traffic police authorities were quick to point out the hazards it entailed.

Having come across the video, Traffic Police DIG Javed Mehar made it clear that action, in accordance with laws pertaining to underage driving, will be taken against Bushra.

As per the traffic laws of Pakistan, those under the age of 24 cannot be issued licenses to drive heavy transport vehicles- the category under which water tankers fall. Hence, driving a truck at the juvenile age of eight years, Bushra is committing an unlawful act.

Moreover, underage driving not only puts the driver’s life at risk but also that of others. Elaborating further on this, Mehar remarked that a minor girl driving a truck can result in a disaster. “It increases the chances of an accident by a significant measure,” he added.

Keeping in view the implications of underage driving, Mehar has ordered that Bushra’s water tanker be immediately seized. He said that under no circumstances will Bushra be allowed to drive the tanker. However, citing Bushra’s reasons behind taking to driving a water tanker, he said that compensation will be provided to support her family and for the treatment of her ailing father.

Besides featuring her driving skills, Bushra has also revealed in the video that she has been driving the tanker to supply water to customers and earn money for the treatment of her ailing father and to support her family.

During a press conference held at Karachi Press Club on Saturday, Bushra further revealed that her father, Israr Ahmed, is paralysed. She said that Ahmed suffered from a paralysis attack about a year ago and he has not been able to work since then.

Having no other means of survival than Ahmed’s income, Bushra’s family was left helpless after the misfortune afflicted them and they eventually had to give in to her demand to let her drive the water tanker and earn a living.

“My father was adamant that he will not let me drive the tanker until I told him that I will commit suicide if he does not give me permission to do so,” said Bushra. “He was left with little choice after that but to teach me how to drive the tanker,” she added. “He now sits beside me on the front seat while I drive the tanker.”

Youngest among her siblings, she was a student of class three back then and taking up driving the tanker meant giving up her education.

Speaking to media representatives, Bushra said that she fills her tanker from the hydrant in Sher Shah and supplies water to customers in Rasheedabad, earning Rs150 on each trip. Bushra makes three to four trips from Sher Shah to Rasheedabad daily.  It was during one such trip that a citizen named Minhaj recorded her video which went viral.

According to Bushra, she faces no trouble while driving the heavy vehicle except when her arm hurts as she steers the truck’s wheel. But she knows she cannot stop to take rest- she has to keep the wheel turning in order to ensure the survival of her family.

Ahmed, who accompanied Bushra to the press conference, expressed worry over the financial issues that have gripped his family after he had a paralysis attack.

Responding to a question, he said that he is aware of the dangers that entail Bushra driving the water tanker.

“I know it can lead to a disaster. She could have met an accident or caught by traffic police,” he said. “I also made it clear to her that I didn’t have money to pay for her bail in case she lands in trouble with the police,” Ahmed added. “But what other option was I left with?”

All this while, Ahmed has been daunted by the realisation that possibilities of Bushra landing herself in trouble, while supplying water to customers, are endless, and yet, much to his relief, worst of his fears have not turned into reality.

Bushra has never met an accident and surprisingly, she was never stopped by a traffic police official.

This indicates the authorities’ and citizens’ negligence towards the issue of juvenile driving, which is a growing problem in the city. Minors riding motorcycles is a common sight in Karachi and the trend has resulted in numerous accidents.

According to Mehar, 177 motorcycle accidents have been from Karachi in the last six months and 82 people died in these accidents. These also included cases of juvenile driving.