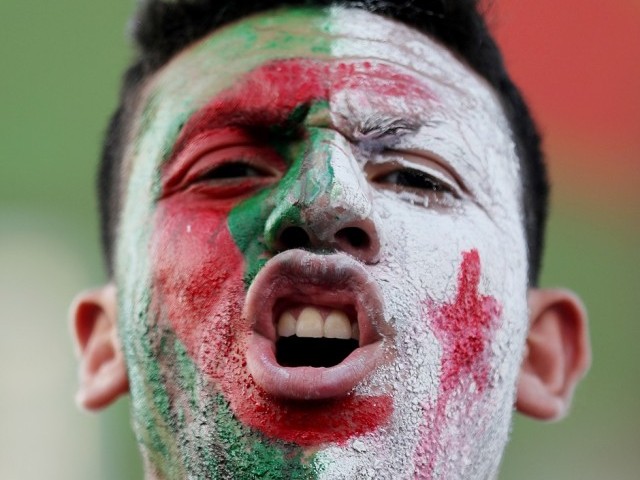 PARIS: Shops in central Paris were looted and a woman was killed in a high-speed car crash in southern France in what the government slammed on Friday as ‘unacceptable’ unrest following a key victory for Algeria’s national football team.

Fans of the Algerian team flocked to the Champs-Elysees in central Paris and the Vieux Port area in Marseille late on Thursday after their side defeated Ivory Coast on penalties to reach the semi-finals of the Africa Cup of Nations.

Two stores near the Champs-Elysees in Paris were looted, including a Ducati motorcycle shop where people took helmets, gloves and even bikes, an AFP journalist said.

Police used tear gas to disperse thousands of people who had gathered in Paris. The same measures were used to scatter crowds in Marseille.

“The damage and incidents last night on the sidelines of the celebrations… are unacceptable,” Interior Minister Christophe Castaner said in a tweet.

“I hail the actions of the security forces in Paris and across the country to maintain order and contain the excesses,” he added.

In total, 73 people were detained, the interior ministry said. Forty of the detentions came in Paris, where 10 minors were also detained.

Migrant whose daughter died slams ‘cruelty’ of US detention

Tourists and locals passing through affected area in central Paris on Friday morning were confronted with shards of broken glass on the streets.

An employee of the Ducati shop said the ransacking of the shop was the second such episode in half a year after it was plundered by yellow vest anti-government protesters on December 1.

Paris’ top police official Didier Lallement visited the scene on Friday, saying it was time that “this kind of irresponsible behaviour stops”.

“As on December 1, what we have seen is organised theft, destruction and intolerable looting. We will continue to fight very strongly against this.” he added.

In the southern city of Montpellier, an Algerian football supporter celebrating his team’s win lost control of his car and ran over a family, killing a woman and seriously injuring her baby, a security official said.

The 21-year-old man was driving at high speed, the official said. The driver was taken into police custody.

The woman was walking with her one-year-old baby and 17-year-old daughter when the accident happened.

The baby suffered traumatic injuries and was rushed to the hospital. The 17-year-old had a slight ankle injury.

Algeria, the favourites in this year’s Africa Cup of Nations, defeated Ivory Coast 4-3 on penalties in the Egyptian city of Suez to set up a semi-final showdown with Nigeria.

Paris and Marseille are home to large minority communities of Algerian origin. Football celebrations, with supporters brandishing large national flags, have on occasion been a source of tensions.

The far-right National Rally party said in a statement the incidents marked a “rejection of France” and urged authorities to ban access to the Champs-Elysees for the Algeria-Nigeria match on Sunday evening.

The mayor of Paris’ 17th district near where the violence took place, Geoffroy Boulard, said that it “appears there was a security problem yesterday night” and added he had been told measures would be reinforced for Sunday’s match.