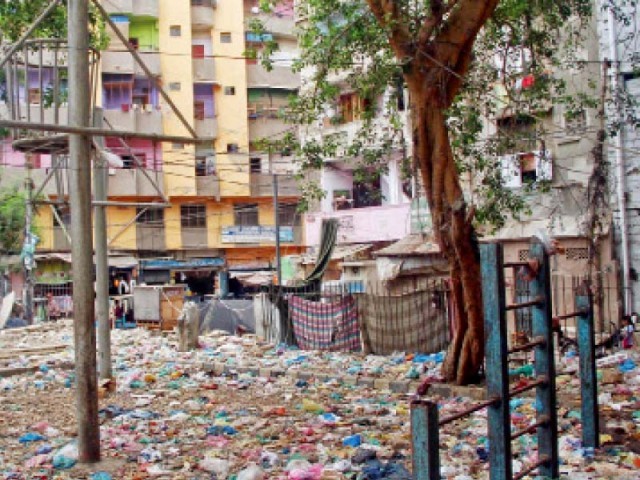 A garbage dump in Soldier Bazaar that hasn’t been cleared for the past several months. Garbage mounds have cropped across the city as authorities have failed to effectively manage solid waste. PHOTO: FILE

KARACHI: Sindh Local Government Minister Saeed Ghani has directed local government authorities to take immediate measures for cleaning garbage and unblocking drains in all districts of Karachi, before the onset of monsoon.

Ghani issued these directives while addressing a meeting at his office on Wednesday.

Expressing dissatisfaction with the state of cleanliness in the city, he reprimanded district officials for their inefficiency. He said that multiple complaints by citizens in this regard indicate that district officials were not fulfilling their responsibilities.

Granting a week’s extension to municipal commissioners for the removal of garbage piles and cleaning the city, Ghani asked them to begin cleanliness work on an immediate basis, after consulting the SSWMB, Karachi Water and Sewerage Board (KWSB) and deputy commissioners. He said that in case the officials face any difficulty in carrying out cleanliness measures, they should approach the provincial government.

Ghani warned the officials that he would pay surprise visits to different areas of Karachi after one week and would take strict action against municipal commissioners and managing director of SSWMB in case he observed any mismanagement or negligence on their part.

During the meeting, municipal commissioners informed the local government minister that garbage from different areas, falling under the jurisdiction of the cantonment board, was dumped in localities within their jurisdictions. Officials from SSWMB too complained that there weren’t enough trucks to collect garbage from the city.

Addressing these issues, the provincial minister said that deputy commissioners should register an FIR against the cantonment board if they receive any complaint regarding the dumping of garbage, from other parts of the city, in areas under their control and shift the garbage truck, used to transfer garbage, to a police station.

Speaking with reference to complaints against KWSB, Ghani said he had already communicated the problems to the managing director of KWSB and is in constant contact with KWSB officials to get the issues resolved as soon as possible.