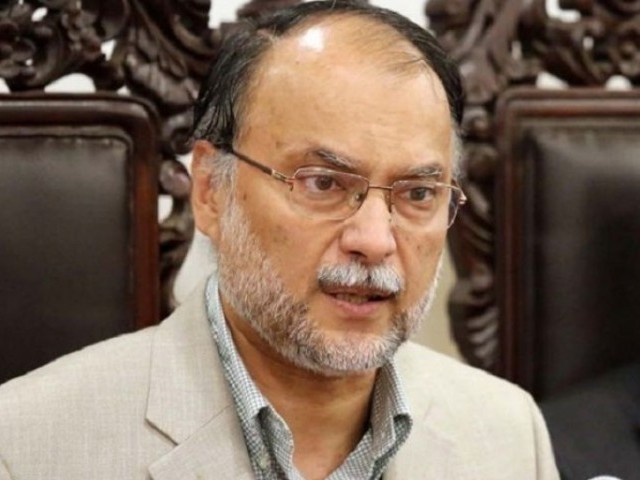 RAWALPINDI: The National Accountability Bureau (NAB) Rawalpindi office on Wednesday handed over a questionnaire to Pakistan Muslim League-Nawaz (PML-N) leader Ahsan Iqbal, who is being investigated for alleged corruption in the Narowal Sports City project.

Speaking to the media, Iqbal claimed he was not quizzed about any corruption in the project by NAB officials but was asked to give details about the administrative aspects of the project.

He insisted that whoever contributed to the development of the country was a culprit now.

“The Narowal Sports City was built for the youth of Pakistan and it should not be made controversial when 90% of the project has been completed.”

“It is an international arena with a sporting infrastructure of international standard. We can offer the best sports facilities here. Is launching such a project a sin?” Iqbal asked.

The PML-N leader demanded that an inquiry should be launched into the Peshawar Bus Rapid Transit (BRT) project, which started off at a cost of Rs1 billion but had now reached Rs100 billion. “That project has turned the city of Peshawar into debris,” he added.

Commenting on Rana Sanaullah’s arrest, he said: “Threats and arrests don’t worry us. We are ready to get arrested. We will take it as medals but we will not surrender and continue exposing the failures of [prime minister] Imran Khan.”

Iqbal reiterated his party’s stance that the budget for the ongoing fiscal year was “IMF-dictated” and vowed to continue opposing it.

“We are fighting for democracy in Pakistan as Imran Khan is trying to turn the country into a Musharraf-era democracy. However, his policies are worse than those of Musharraf.”

Iqbal is accused of starting the Narowal Sports City project — worth Rs3 billion — illegally. The Pakistan Sports Board also faces charges of illegally using its authority for the construction of the project.

In 2018, NAB announced an investigation into the alleged violation of rules in the construction of the project – just a day after its inauguration by President Mamnoon Hussain.

The anti-graft watchdog claimed in a statement that it had received a complaint that the Narowal Sports City project was constructed at a cost of approximately Rs6 billion.